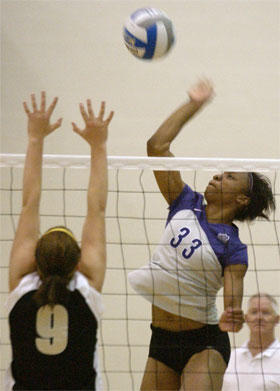 The volleyball team bounced back from its loss to New Mexico and scored its second win in conference play, beating the Wyoming Cowgirls on Tuesday night in the University Recreation Center.The Horned Frogs are 2-3 in the Mountain West Conference and 12-7 on the season after defeating Wyoming in three games (30-28, 30-27, 30-22).

Head coach Prentice Lewis said she was impressed with the Frog’s performance against Wyoming’s solid defense.

“I warned (the players) about Wyoming’s defense, but I don’t think they could fathom it,” Lewis said. “They had to see it with their own eyes. When they did, they picked up their game and won three tough games.”

Senior outside hitter Hayley Harmon said the Frogs had to be patient because Wyoming’s defense was challenging.

“It was frustrating because they were digging a lot of our balls, and we were having really long rallies,” Harmon said. “But we stepped up our defense and played really well.”

Lewis recognized Harmon for a great performance against Wyoming.

“She did really well in positioning herself,” Lewis said. “She and LeMeita Smith, who had 15 kills, worked the game to their advantage and had some really hard hits.”

Sophomore outside hitter Talayla Whitfield had 22 digs, just one short of her own school record of 23 for a three-game-match. Her 22 digs moved her into fifth place all-time for career digs.

In preparation for this weekend’s matches, Whitfield said the Frogs need to work on “everything” to stay consistent.

Harmon said the Frogs need to focus on making quick adjustments and mixing up the offense.

Lewis said the Frogs’ problems are understandable because the team has a lot of young players.

“We do have to work on our offense, but that has a lot to do with ages of our players,” Lewis said.

The Frogs will travel to UNLV on Friday and San Diego State on Sunday for conference games.