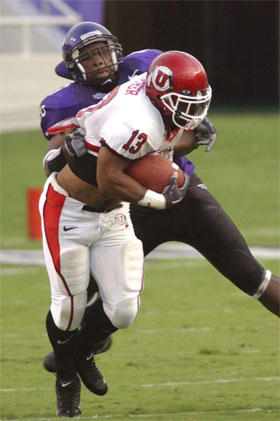 After TCU’s overtime victory against Utah, head football coach Gary Patterson quickly took the proverbial air out of the balloon heading into Saturday’s game at Brigham Young.”The Utah game is done, and we’ve turned our attention to Saturday at BYU,” Patterson said at his media luncheon Tuesday. “I expect to see BYU’s best ballgame. They’ve had two weeks to prepare for us and get their legs back.”

The Cougars had a bye last weekend, but they are coming off a 40-10 blow out victory over Eastern Illinois two weeks ago, in which they accumulated more than 400 total yards and allowed only 196.

A strong BYU offense has had to try to make up for a mediocre defense over the past four years (27.4 points per game compared to 27.7 points allowed each game), but the Cougars’ first two games have shown that they may be reversing the trend defensively, allowing only 15 points a game.

“BYU plays great defense, and we’ll have to find a way to take the ballgame,” Patterson said. “Their (defensive linemen) are all 300-plus pounds. It allows them to keep leverage. … We have to find an answer to it.”

“We’re just going to keep doing what we’ve been doing,” Merrill said. “We have a fast offensive line, and our speed can take care of itself.”

Even if “doing what we’ve been doing” involves true freshman running back Aaron Brown, who rushed for 163 yards on 17 carries against Utah, Merrill said he is OK with the game plan.

“I was happy for him. … We had a big game against Utah, and he ran hard,” Merrill said. “If he can come out and do (Saturday) what he did last week, we’ve got a great chance.”

With senior running back Lonta Hobbs currently listed as doubtful, Merrill will start Saturday despite Brown’s strong performance last weekend. Freshmen tailbacks Justin Watts and Detrick James will be in reserve behind Merrill and Brown.