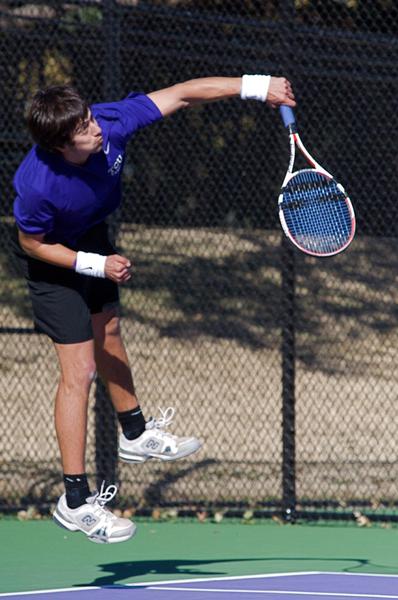 Men’s tennis coach David Roditi said, “(Texas) A&M is our highest ranked team we play at home, it was a match we’ve had circled on our calender all season.”

The Frogs are coming off of a loss to Baylor 10 days ago, which means the team had an extra weekend to focus on their academics and catch up on rest before the challenging match, Roditi said.

“(Texas) A&M has one of the best players in college tennis in Austin Krajicek,” Roditi said, “It is going to be a tough team.”

TCU senior Emanuel Brighiu has a personal past with A&M’s Krajicek.

“I’ve played him (Krajicek) every year since I came to TCU, I beat him my freshman year, and he beat me the two years after that,” Brighiu said. The players are both seniors this year, so this will be their last match in a TCU versus A&M setting.

“I’ve played him in doubles too,” Brighiu said.

Last year, Brighiu and his doubles partner, senior Chris Price, were able to defeat Krajicek and his partner Jeff Dadamo. That win against a ranked doubles team qualified Brighiu and Price to play in the NCAA Tournament last season.

“We play them every year, we always have close matches with them, it’s kind of a Texas rivalry,” Brighiu said.

The Aggies are a top-10 team coming off two loses and a win in an indoor tournament played Sunday.

“We are charged up,” Roditi, “If tomorrow we can get that doubles point and stay with (Texas) A&M in the singles match, close enough to where the crowd and the home turf becomes a factor, that’s how we will come out with a win.

“We need the crowd to come out and support us, get some free Mama’s Pizza…and see our new Ball Kids,” he said.

Aside from being the first home night game, it will also be the first game with the TCU “Ball Kids” , said TCU Athletics Media Relations Assistant Director Jamie Handy.

“There will be about 27 middle school kids at the (Texas) A&M game,” Handy said, “We had a training session with them on Monday so they are ready to go.”

The “Ball Kids” will be at all of the 6 p.m. home games TCU tennis plays, including matches against Texas A&M, New Mexico State, New Mexico and SMU.

TCU is the only NCAA tennis in the state other than the University of Texas that has a “Ball Kids” program, Handy said.

For more information and how to become involved with the “Ball Kids” program, contact TCU assistant coach Mark Tjia by e-mail (mark.tjia@tcu.edu) or phone (817-343-5188).

Go to DailySkiff.com for updates and final results.