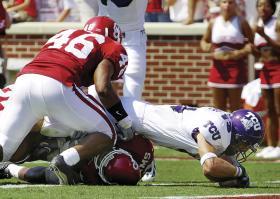 The Horned Frogs may have shocked the college football world with their 17-10 win at Oklahoma on Saturday, but they did not shock themselves.Believe it or not, the Frogs, coming off a 5-6 season, said they knew they could knock down a Big 12 Conference giant, ranked higher than any team TCU has beaten since 1961, in front of 84,332 mostly hostile fans.

“It was a big win, but like we said, we were expecting it,” Coleman said.

“Everything that they threw at us, we have seen (last) week,” Taylor said. “Hard work – I mean, that’s what gives you confidence – hard work. It all starts in the head.”

Head coach Gary Patterson, beaming after his first win over a top-10 opponent, praised his players for their work ethic leading up to Saturday’s game.

The defense limited OU to 225 yards of offense, and held 2004 Heisman Trophy finalist running back Adrian Peterson to 63 yards on 22 carries as part of a game plan to make inexperienced Sooner quarterbacks Paul Thompson and Rhett Bomar throw, Patterson said.

Patterson said his first- and second-year players on defense, especially his linebackers, showed their readiness and that they could handle big-game pressure.

“You just expect more mistakes,” Patterson said. “There were just a lot of people who stepped up to the plate today and made a difference.”

Like OU TCU had trouble with the ground game. Backfield duo Robert Merrill and Lonta Hobbs combined for only 68 yards on 25 carries.

Quarterback Tye Gunn led the offense, completing 24 passes in 45 attempts for 226 yards, with one touchdown and one interception.

Gunn’s favorite target, wide receiver Cory Rodgers, caught 10 passes, tying a career high, for 79 yards, but said after the game that the offense can only go as far as the defense takes them.

“We tell the offense every game, ‘We feed off our defense,'” Rodgers said. “We don’t take a lot of shots. We try to stay conservative, control the clock, control the game. The way our defense played, we were kind of like, ‘Man, we really do have a chance to win this game.'”

Sophomore linebacker David Hawthorne, one of the players Patterson credited with leading Saturday’s defensive charge, said his unit had a statement to make after finishing 99th in the NCAA in total defense last year.

“We had a point to prove, being ranked one of the worst defenses last year,” Hawthorne said.

TCU players and coaches said the team has not proved its point yet.

Patterson said his team realizes it still has work to do and has only won one game in a long season.

“This game doesn’t mean anything if next Saturday, when we go to Dallas, we go get beat by (SMU),” Patterson said. “We won’t fool the next team. They’ll know what we’re doing – how we’re doing things.