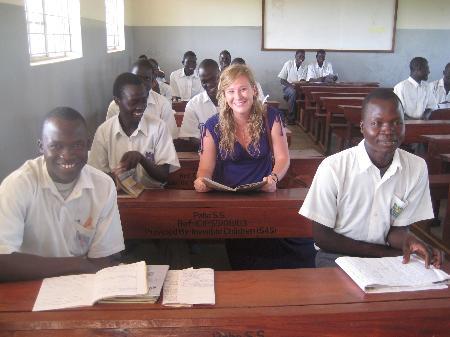 Erin Griffin knows what it’s like to be a part of change.

The senior entrepreneurial management major departed for Kacyiru Kigali, Rwanda, in May after being asked to help develop a market there for KEZA, a nonprofit clothing company that strives to develop a means for women of the area in need.

And it was exactly what she was looking for.

“I was trying to show the beauty of Rwanda and the beauty of African women,” she said, “(I wanted) to give them the confidence to build them up.”

Griffin worked with BURANGA, a franchise of KEZA that is owned and operated by 40 women in Kigali. The women make jewelry from recycled paper.

Griffin said Rwanda is a country haunted by genocide and civil war, but her goal was to portray Rwanda for what it is today.

“You couldn’t even tell the genocide took place,” she said. “They look to move forward in the future. The level of forgiveness going on – you can’t even speak about it. There are neighbors that didn’t even talk to each other before. Now they’re helping each other work together.”

Griffin’s desire to help developed in high school after she learned about an organization called Invisible Children. When she came to the university as a freshman, she attended a screening put on by the organization and was hooked.

She said she knew she would find herself in Africa at some point.

“My heart has always been in Africa; my parents had been in Africa, and my heart had been called to conflict areas,” she said. “My vision of Africa is that these people are beautiful but suffering.”

Griffin’s vision was one that KEZA shared.

According to the company’s Web site, Keza.com, its goal is “developing the lives and businesses of African women; giving them something they can believe in and own.”

Invisible Children, much like KEZA, gives something for students to believe in and own.

In theory, the connection between Griffin and KEZA was an ideal one, but Griffin had her doubts and fears, mostly because she was entering a country that had been rebuilding itself for 15 years.

She was told that she “wouldn’t have a smile out of someone for a month.”

“First, I was afraid that I was putting myself outside my safety zone,” she said. “Their view of an outsider is more hesitant. They wanted to discover why I was there.”

After some time gaining trust, Griffin’s fears were dispelled as she formed friendships with the women working at BURANGA. Even though she did not speak their language, she learned to connect with the women through emotions, she said.

“My fear never went away in public, but with the women, it was easier,” she said. “They were sad when I left and asked me when I would return.”

Thanks to the connection Griffin made with Africa through Invisible Children, she might just be able to return.

Taylor Murdoch, a Texas representative for Invisible Children who promotes the charity, knows that it’s people like Griffin who make the organization’s efforts possible.

“It’s 100 percent through the persistence of the youth to see it happen,” Murdoch said. “We provide ways to help and encourage (students) to use what encourages them and inspires them to tell others about what’s going on. If it’s an artist, someone who can paint about things and do it in that way, that’s how we want them to do it.”

Griffin’s connection with Invisible Children was undeniable when she traveled to Rwanda.

She was given the opportunity to visit Pabbo Secondary School in northern Uganda, which was made possible by Invisible Children’s “Schools for Schools” program.

Pabbo is an all-boys school in a region that has a large population of former child soldiers who were forced into combat at a young age. The majority of Pabbo students are internally displaced people, or IDPs, pulled from one of the largest IDP camps in the area.

“(That camp) is now being torn down and its inhabitants are being returned home, largely in part by the work Invisible Children has been doing in the region to raise awareness and put an end to the war,” Griffin said.

Pabbo and nine other schools like it are made possible by the funds raised by Invisible Children.

The TCU Invisible Children chapter has contributed a significant amount to this cause, Griffin said.

While at the school, she was able to see how these funds were used.

“Pabbo was able to build a water system, buy books, build new latrines and buy one of the biggest generators to power the school with electricity,” she said. “When I left Pabbo, the headmaster left me with one message. He said, ‘Thank you so much,'”

Griffin’s visit to Pabbo left her with more than a great experience. She said she also decided she would try to establish a scholarship program at TCU for the boys at Pabbo.

Murdoch recalled Invisible Children’s Rescue tour last spring, which 80,000 people from more than 100 cities attended. It was a success due to the initiative of students doing their part and advertising, he said.

“All Invisible Children did was to utilize e-mails, its Web site and YouTube,” Murdoch said. “It was all based on the kids using their work to get the word out.”

Society views young people as apathetic regarding that which happens in Africa, Murdoch said. But he said he’s seen firsthand that such a view is mistaken. All one would have to do is ask Oprah Winfrey.

“Youth stayed for a week in Chicago to get a hold of Oprah, and it paid off,” he said.

Paid off is right. Invisible Children was able to make an appearance on Winfrey’s television program to promote the cause.

Griffin’s next endeavor is an example of just how much her experience in Rwanda affected her. She will be pursuing an opportunity with Reach, an organization that specializes in reconciliation in post-conflict situations like that in Rwanda.

While in Rwanda, Griffin was able to attend a Reach seminar between killers and victims involved in the genocide.

“(The killers) were all there voluntarily,” she said, “They had spent 14 years in prison and felt such remorse that they were freed. They have helped the victims rebuild their houses, and there are choirs with both victims and killers.”

Invisible Children was a means by which Griffin achieved her goals, and also a means by which her life was changed. Griffin knew that by partaking in the adventure ahead of her in Rwanda – as scary as it was – she would be able to take part in changing the world and herself.

“I’m hoping to bring back the message that children can still make a difference and be globally aware, like the TCU mission states,” she said.