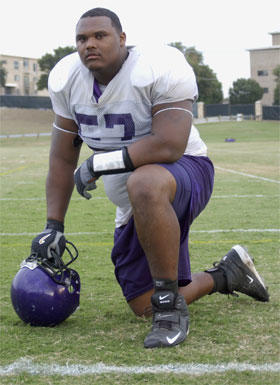 When asked to describe himself, senior Zarnell Fitch sums it up in one word: dedicated.”So much has happened in my life,” said Fitch, a nose guard on TCU’s defensive team. “Coming from a small town like Spencer, (Okla.), you had to be dedicated just to get out of there.”

Fitch, his two sisters and younger brother were raised by their single mother in Oklahoma. At a young age, they all made a promise to each other that they would take the burden of paying for college off their mother.

“We made a promise to each other that we would get athletic scholarships,” Fitch said. “We knew that mom couldn’t pay for it all by herself.”

Fitch said they all have held up their end of the promise. His older sister earned a scholarship to Illinois to play basketball, his younger sister recently signed with Oklahoma State to play basketball and Fitch’s little brother has received football offers from numerous schools, including TCU and Baylor.

“My brother is like the No. 3-ranked player in the state of Oklahoma,” Fitch said. “We’re just really blessed about everything.”

Fitch’s road to TCU was not a simple one. He started his college career at Navarro Junior College, where he played two seasons, and then moved on to Tennessee in spring 2003. His stay there was not long, as he returned to Navarro to finish his academic requirements.

“From the spring, he started showing indications that he was really ready to play,” Bumpas said. “When he first came here, he had been out of football for quite a while. He has done an outstanding job just getting back into it.”

Fitch said the entire defensive line had to adjust along with him.

“Last year, we didn’t have a typical D-line year for us,” Fitch said. “This is a D-line school, and that is the reason I came here from Tennessee. This year, everybody is just stepping up their game and playing hard every snap.”

Defensive end Tommy Blake said Fitch has been everything he could want from his nose guard.

“Big Z is one of a kind,” Blake said. “He takes a lot of pressure off of me and frees up the ends on the pass rush. We do a lot of damage when he’s out there.”

Bumpas said Fitch’s unselfishness stands out on the field.

“Fitch is all about the team doing well,” Bumpas said. “He isn’t concerned with who gets the credit, as long as people around him are being successful. Because of that, I look for more good things from him.”

Although his attitude is one of unselfishness, Fitch said the one thought going through his head when he lines up against the offensive line each snap is, “I hope I get back there before Tommy (Blake).”

Fitch said his main goal when on the field is not always to make the tackle but said he will take it any chance he can get.

“I’m a nose guard, so I’m going to take on a lot of double teams,” Fitch said. “My main job is to keep the linebackers free and then, if the opportunity comes, make the tackle. We’re a run-stopping team, and I love it because that is my best quality – stopping the run.”

Against Wyoming, Fitch made that tackle, as he sacked the quarterback on third and goal late in the game.

“That was probably my biggest play of the year,” Fitch said. “I’m just happy I got a chance to make a difference late in the game.”

When did you start playing football?
4 years old

Who is your role model? Mother and big sister

What’s your idea of a perfect day?
Waking up and eating breakfast at IHOP, going to class and my teachers are interesting. Come and have a great practice. Then going home, laying down and relaxing and getting a chance to see my sons.

When you were younger, what did you want to be when you grew up?
I wanted to be a basketball player.

Book: Don’t read too many books, but favorite magazine is “Sporting News”

Day of the Week: Friday because we get all the food in the hotel.

Quote/Saying: Only the strong survive.

Thing to do: Playing pool/spending time with my family

Restaurant: On the Border