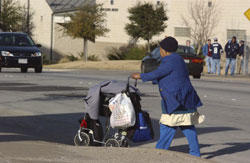 With more than 5,000 people living on the streets, homelessness in Fort Worth is a problem. But it’s not one with many known solutions.In the spring of 2005, a health and human service needs assessment conducted by United Way of Tarrant County identified homelessness as one of the major trouble spots in Fort Worth.

More than 20 percent of respondents surveyed by United Way identified homelessness as a major or minor problem in their areas, up from just over 6 percent in a 1999 survey.

As a result, said Barbara Asbury, senior housing planner with the City of Fort Worth, the city created a task force in May aimed at finding a way to get Cowtown’s homeless off the streets.

“Basically, the City Council has said we need to take action on this, but we don’t know exactly what we need to do,” Asbury said.

Asbury said with grant funds provided by the U.S. Department of Housing and Urban Development, Fort Worth Mayor Mike Moncrief appointed a variety of local contributors to a new permanent body, the Mayor’s Advisory Commission on Homelessness.

The commission, which first met in October, is made up of 19 members representing a diverse range of the Fort Worth population, from business leaders to a current or former homeless person. It will meet monthly until March, when it will make recommendations for the city’s approach to the homeless problem.

Don Shisler, president of Union Gospel Mission of Tarrant County, a homeless service provider in Fort Worth, said homelessness has been an ever-increasing problem for the city – one fueled by underemployment, income barriers, substance and domestic abuse, and mental disease.

“It’s a big problem and it’s growing,” Shisler said. “Most individuals have more than one, or two or three issues they are dealing with, so it’s complex.”

Mike Doyle, president and chairman of the Tarrant County Homeless Coalition, said with so many causes for homelessness, it’s no wonder a solution has been elusive. He said Fort Worth is on the right track toward fighting the problem.

“There are so many issues,” Doyle said. “Collaboration and planning is what needs to be done, which is what’s being done with the commission.”

Part of the commission’s job will be to develop a 10-year plan to end chronic homelessness, something Tarrant County has already done, said Scott Ruthart, supportive housing program manager for Human Services of Tarrant County.

Ruthart said the Fort Worth commission will be able to use the county plan as a model.

“They’ll look at our plan, they’ll tweak it to their needs, and we’ll get together to work it out,” Ruthart said.

He said the county has a representative on the commission, which is part of the city-county partnership that will be key to ending chronic homelessness.

Doyle cited a couple reasons why ending homelessness is in the interest of the average person, not just those living on the streets.

“No. 1, the pure moral responsibility that we have to the weakest of our citizens, and No. 2, the bottom-line costs to the city.” Doyle said. “It makes good economic sense to take care of them in some other way than the way we’re taking care of them now.”

Shisler agreed that accepted homeless care methods need to be changed, saying that too often, homeless aid is focused on providing basic, immediate needs rather than working to improve the circumstances in a person’s life that make life on the street a reality.

Shisler’s Union Gospel Mission houses 300 people at a time, about 50 of them children, and provides chapel services, access to government aid programs, meals and programs designed to combat the various ills affecting the homeless. It has served Fort Worth since 1888.

Shisler said the city needs shelters that immediately provide food and a place to sleep, but programs that work with the homeless, offer solutions and monitor their clients in shelter and postshelter lives will be most effective in getting – and keeping – people off the streets.

“I think what we need to do is be proactive, build relationships with people who have been chronically homeless,” Shisler said, “and then offer them solutions to their problems and wraparound service to work through these solutions to get them into housing and to monitor them to help break the cycle.”

Shisler said faith groups need to take the lead in providing the kind of long-term programs he mentioned.

“There are a lot of upstart costs to doing this type of thing,” he said, “but down the road it will be a lot more cost efficient than you could ever imagine and I think the church community needs to be right at the front of this – leading the charge.”

Doyle said government, religious groups and the social service community need to get together to develop some of the long-term programs Shisler said will be key to putting a dent in chronic homelessness.

He said prisons, foster care systems and hospitals need to implement plans to provide for transitional housing for people released from those facilities.

“It takes a community effort to deal with this issues,” he said. “There’s always that temptation to say just throw more money at it, but what we need on this issue is leadership.”

Ruthart said Tarrant County, like others across the nation, has made little progress in decreasing chronic homelessness.

Ruthart said the 10-year plan is aimed at correcting that condition.

“The people you see driving down Lancaster, the people who spend a year or two living in shelters, that’s who we’re really trying to help,” he said.

In order to better help the homeless, Human Services will begin a comprehensive count of Tarrant County’s homeless next week, Ruthart said.

Ruthart said the current estimation of homeless in Tarrant County of 5,278, a number Doyle said jumps by about 10 percent to 12 percent each year, is unreliable because it relies on multipliers and projections based on the county population, rather than an actual count of the homeless.

Human Services will send 300 to 500 volunteers to 12 different geographic regions to count each homeless person individually, something Ruthart said is necessary to get a better idea of the exact need in Tarrant County.

“The counts are kind of a phenomenon across the county,” Ruthart said.

He said Human Services has to do the count in order to receive maximum continuum of care grants from the Department of Housing and Urban Development, money Tarrant County needs to combat problems specific to the area.

“You have to show a plant that encompasses the whole region to maximize funds,” Ruthart said.

Shisler said Fort Worth’s three major shelters only provide 1,500 beds, well short of the need given the homeless population, so he is optimistic that the count will allow the area access to the money it needs to provide services.

“I’m kind of excited to see what this head count is going to reveal,” Shisler said. “I don’t know if it’s going to be more people, less or what, but I’m curious to see what it is.”

Ruthart said Fort Worth, Arlington, the Tarrant County Homeless Coalition, the Community Development Commission and Parker County have worked together to distribute continuum of care grants throughout the area so there is not duplication of the services provided.

Shisler said Tarrant County has more than 5,000 nonprofits and he is glad that agencies providing duplicate services will be eliminated or merged.

“Homelessness affects all families,” Shisler said. “When the homeless can’t rely on family or friends, that’s how they become homeless. They revert to us.