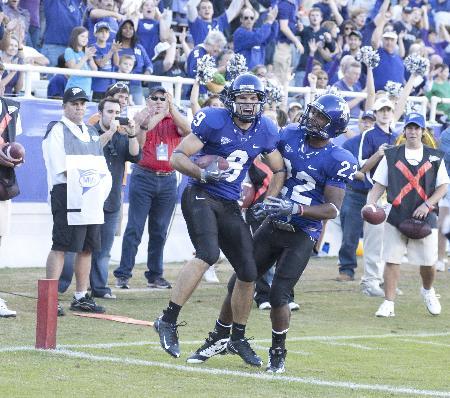 The Horned Frogs might not need another LaDainian Tomlinson if their tailback by committee system keeps working so well.

Senior tailback Joseph Turner, who averaged 6.5 yards per carry in the win, said that sharing the ball with his fellow runners has its benefits when it comes to staying energized.

“I can tell that we stay fresh,” Turner said. “I’m just happy to be playing with some talented running backs.”

Freshman running backs Ed Wesley and Matthew Tucker also had big contributions on the ground. Tucker ran for 59 yards on nine carries, while Wesley ran for 86 yards on seven carries, including a 59-yard touchdown run in the second quarter to put the Frogs up 17-0.

Junior quarterback Andy Dalton, who passed for 178 yards and three touchdowns, also praised the poise of the freshman running backs.

“I think they really understand the system and what they’re doing,” Dalton said. “That’s really helped to their success.”

While a lot of the yardage was gained on the ground, four of TCU’s five touchdowns came through the air.

Dalton hit junior wide receiver Jeremy Kerley for a 14-yard touchdown that put the Frogs ahead 27-0 in the third quarter.

The defense was just as stout as TCU’s offense on the day, holding UNLV to 160 total yards.

UNLV’s punter, Kyle Watson, punted for about two and a half times his team’s total offensive yardage, for a total of 457 yards.

Junior safety Tejay Johnson said a lot of the credit for the shutout goes to the Frog defensive line.

“I think our defensive line deserves a lot of the credit because their quarterbacks didn’t get a chance to pass much with the pressure that we were able to have,” Johnson said.

Head coach Gary Patterson praised the fan support at the game. He said the fans, and especially the students, were loud and supported the team.

“It’s the best we’ve had this year,” Patterson said. “The students were into it, they gave it everything they had. Let’s hope it lasts for the rest of the season.”

The crowd must have been loud relative to its size, however, as it was the second smallest for a home game this season. With 33,451 on hand for UNLV, only the Colorado State game had less spectators, with 31,156.