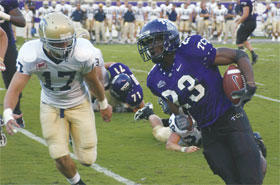 The Horned Frogs football team defeated the UC Davis Aggies on Saturday 46-13, taking the nation’s No. 1 winning streak from the Texas Longhorns at 12 games.Although the division 1-AA Aggies shut out the Frogs on their initial drive and took the first lead of the night with a field goal, the Frogs quickly regrouped and, after taking the lead on the next drive, never looked back.

“There’s more confidence of the guys on the field,” Patterson said. “Now, our freshman corners have two games instead of one.”

Jeff Ballard, who left last weekend’s game against the Baylor Bears because of blurred vision and migraines, started the game and extended his undefeated streak as a starter to 10 games as a starter.

“(The streak) is something special for me,” Ballard said. “It’s not really my goal; it’s a team goal. Even though I’m undefeated, the team is as well, and that’s more important.”

“That was my first one in college,” Phillips said. “(Picking off passes) really helps our defense’s mentality.”

Patterson also said he was happy to see the defense return to last year’s form.

“It was nice to see us get back to picking some footballs,” Patterson said. “We dropped a couple, but we’re breaking on the ball.”

On the offensive side of the ball, sophomore tailback Aaron Brown, who starts for the injured senior tailbacks Robert Merrill and Lonta Hobbs, continued his impressive run as starting tailback.

“(Hobbs and Merrill) have a lot of confidence in me not to just lead the team, but to pick up where they left off,” Brown said.

Brown scored on two option plays, which he said is the team’s go-to play.

“We love that play,” Brown said. “That’s one of our bread and butter plays. We go to it a lot throughout the game. We work on it day in and day out in practice.”

Aside from the positives in the offense and defense, Patterson said the Frogs do have work to do in the upcoming week of practices.

“I’m not happy without PAT/field goal team,” Patterson said. “We still made some critical mistakes on drives that we can’t do against the good people. Defensively, we gave up a couple of long plays and pass plays we didn’t need to give up. It was more our fault than it was their fault. We can’t do that against a couple of the people we have coming down the pipe, so we a lot of work to do.”

The University of Texas held the nation’s winning streak at 21 games, but lost to the Ohio State University Buckeyes 24-7.

The Horned Frogs will next play the Texas Tech Red Raiders at 4:30 p.m. on Saturday in front a sold-out crowd. The game will be televised on OLN.