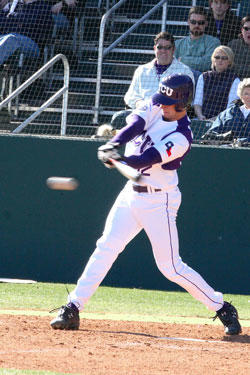 With winds blowing toward the outfield gaps, there was little dout that the powerful lineups of the No. 21 TCU Horned Frogs (5-1) and the Oral Roberts University Golden Eagles (2-2) were going to test their might in the confines of Lupton Stadium.The Horned Frogs managed to bang out seven extra-base hits, two of which were home runs by leadoff man Bryan Kervin and senior right fielder Austin Adams en route to a 10-8 TCU victory. The Golden Eagles counter with three home runs during the game.

The afternoon started with TCU jumping out to a 2-0 lead by manufacturing runs on basehits, stolen bases and sacrifice bunts. The Golden Eagles responded to this with similar small ball tactics in the third inning.

Shortstop Adam Younger led off the inning for ORU with a walk and then moved 90 feet on a sacrifice bunt by Kelly Minissale. TCU starter, Chance Corgan seemed to have trouble with his control at that point and walked Patrick Duffy and then threw the next pitch into the backstop which moved both runners into scoring position with one out. A single up the middle by second baseman Jake Kahaulelio cut the lead to one runa nd brought up the middle of the ORU lineup. Catcher Brian Van Kirk flew out to center field and the Horned Frogs were nearly in the clear with two outs and runners on the corners. A botched defensive play to try and corral the two baserunners fell in ORU’s favor as Duffy crossed the plate tying the game.

ORU continued to put pressure on the Horned Frogs in the fifth inning when the Golden Eagles put another three runs on the board against Corgan and relief pitcher, Cody Dunbar.

With TCU three runs downa nd entering the latter third of the ballgame, the Frogs were in need of a rally. Left fielder Clint Arnold gave the Horned Frogs the push needed to draw even with a two-run one out double that was three feet shy of a grand slam.

“We wanted to get the ball in the air and score that run from third base, and with the wind we had it work out for the best,” head coach Jim Schlossnagle said.

Sophomore utility player Ben Carruthers drove in the tying run in the sixth inning with an infield single.
Keeping the ballgame neck and neck was freshman right hander Tyler Lockwood. During his 1 2/3 innings of work, he managed to shut downt he Golden Eagles and did not allow a runner to advance beyond second base.

The eighth inning put the Frogs in comeback mode yet again when redshirt freshman Derek VerHagen gave up a home run to ORU senior, Carter McQuigg putting TCU behind 6-5. VerHagen was in his first collegiate appearance and after the home run, settled down and retired the next five batters he faced, three of them by strikeouts.

“I was expecting to be pretty nervous, but I felt natural once I got out there,” VerHagen (1-0) said.
In the bottom of the eighth inning, the game turned into a home run contest as both teams pepperd the hillside beyond Williams-Reilly Field with four longballs in the final four outs.

Bryan Kervin put TCU in the lead with a two out two-run homer off of Eric Crichton and then third baseman Steven Trout kept the rally going with a double down the left field line. The Frogs were not through scoring yet as Andrew Walker worked a five pitch base-on-balls and Austin Adams stepped to the plate.

With two runners on, Adams deposited a 1-0 Crichton fastball onto the terrace beyond the left-center field fence padding TCU’s lead at 10-6.

In the ninth inning, VerHagen’s breaking pitches found a way into the strikezone and kept the ORU batters off balance, until back-to-back homeruns by Van Kirk and first baseman Ben Rothford which brought the score to within two. Rothford had been held hitless in the series until that at bat.

“I didn’t really have time to establish my fastball and I left a couple of them up,” VerHagen said.
In a last ditch effort by Oral Roberts the Golden Eagles pinch hit for designated hitter Tyler Warmerdam with outfielder Andrew Wells. VerHagen struck out Wells with five pitches earning him his first career win as he shut the door on ORU.

Noteable performances came from Adams who had three hits, three RBI and a run scored and Bryan Kervin who had a pair of extra base hits and reached base three times.