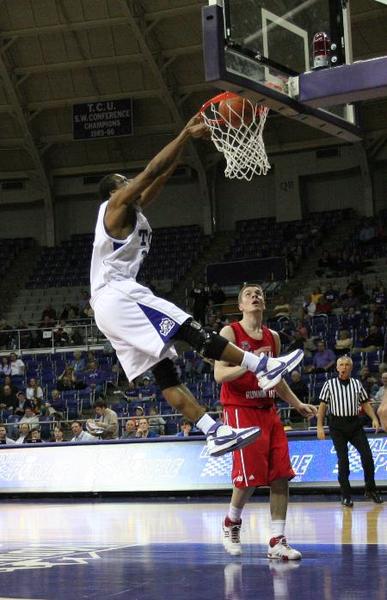 Size was not a problem for the men’s basketball team, which beat the University of Utah 67-61 at Daniel-Meyer Coliseum on Wednesday.

Despite Utah’s height advantage with three of its top players listed at more than 6 feet 8 inches tall, TCU found a way to take the ball to the rim.

TCU had to find a way to defend Utah’s size and its ability to shoot the ball, head coach Neil Dougherty said.

“Offensively we played with great balance and recognition,” Dougherty said.

He said he wanted to make the Utes work on defense so TCU drove the ball and was able to play off that.

Senior forward Alvardo Parker, who averages 5.2 points per game, had 14 points to go along with 3 blocked shots.

“He exploded a couple of times with great quickness,” Dougherty said.

Hackett said he felt like he could “take” his opponent so he drove the ball.

Hackett hit a 3-pointer with seven seconds left in the first half, putting the Horned Frogs up by one at halftime. The Horned Frogs would not relinquish the lead for the rest of the night.

When the teams first met, the Utes beat the Horned Frogs 74-58 at Utah.

Dougherty said his team made some great adjustments this week.

TCU held the Utes’ senior guard Johnnie Bryant, who scored 24 points against the Horned Frogs in the two team’s first meeting, to only eight points.

Starting guard Henry Salter, who averages 13.3 points per game, sat out Wednesday during his first game of an indefinite suspension. Senior Ryan Wall was given the start in his position. Junior forward Kevin Langford also contributed 16 points for TCU.

This game marked the 13th home victory for TCU, which improves to 14-12 overall. The Horned Frogs are 6-7 in conference and have three games left before the MWC Tournament.

The next game is March 1 at the University of Nevada, Las Vegas. The last time the teams faced off, UNLV beat TCU 70-58 at Daniel-Meyer Coliseum.