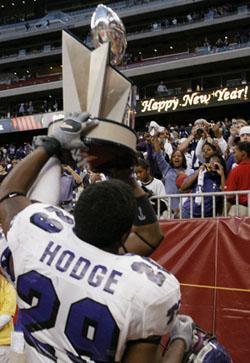 To win the closest game in Houston Bowl history, the TCU Horned Frogs were forced to turn to the kicker that was partially responsible for putting the one in their 10-1 season.Junior reserve kicker Peter LoCoco, who was benched after missing three field goals in a Sept. 10 loss to SMU, nailed a 44-yarder with just over five minutes remaining to set the stage Saturday for the Frogs’ 27-24 victory over the Iowa State Cyclones.

“That was Dan’s call,” Patterson said. “He goes out with them every morning and sees how they’re kicking. It’s kind of like in golf, ‘How’s your swing today?’ He obviously had confidence in LoCoco.”

That field goal proved to be TCU’s only score of the second half, however, as the Frogs came close to squandering a 14-point first quarter lead by doing the very thing they had managed to avoid all season: turning the ball over.

The Frogs came into the game with the second best turnover margin in the country (19) but kept ISU in the game by turning the ball over three times. With the game tied in the fourth quarter and the Frogs desperately searching for momentum, junior running back Robert Merrill fumbled the ball across the ISU goal line, giving the Cyclones the ball at their own 20. Though the defense forced one of ISU’s eight punts soon afterwards, Patterson said the game was in doubt until the final minutes.

“A couple plays here and there, and things could have turned out differently,” Patterson said.

Junior quarterback Jeff Ballard improved to 8-0 as a starter, despite throwing an interception and being sacked six times. Ballard almost cost TCU the opportunity for the winning field goal by dropping back too deep in the pocket and taking a sack for a loss of 14 yards, but threw a long completion on third down to move TCU back into scoring position for LoCoco.

Ballard said while the game was not his personal best, the team showed both the poise and character necessary to win close games.

“It was probably the most I’ve ever been sacked, and some of them were my fault,” Ballard said. “It was a total team effort. We play with a lot of heart.”

TCU, which has the best record of all non-BCS teams, continued their case to end the season ranked in the top 10 of the AP Top 25 poll. Patterson said aside from the temporary euphoria of a close victory, he still feels that the Horned Frogs are a legitimate top-level team.

“Right after a ball game like this, you feel like you’re No. 1,” Patterson said. “But we wanted an opportunity to finish high and jump into the top 10 in the final rankings. I feel like we’ve earned it.”

Despite the close loss, ISU coach Dan McCarney offered no objection to the notion.

“When you win 11 games, with (TCU’s) kind of class, you should be in the top 10,” McCarney said. “I’ll give them a lot of consideration on that vote.”

Ballard said the win was the perfect way to close out a storybook season.

“It doesn’t get any sweeter than this,” Ballard said. “It really doesn’t.