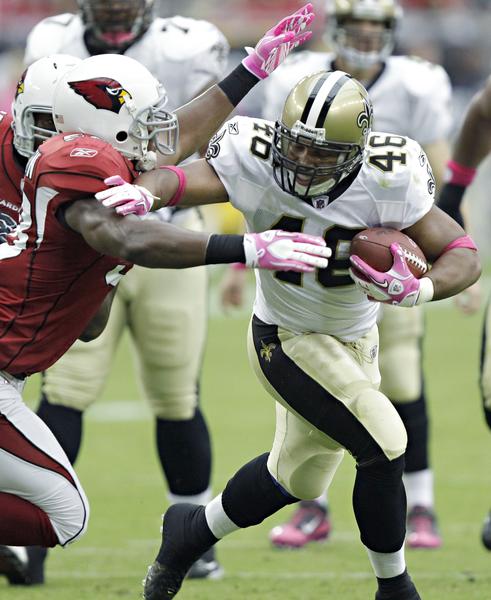 Analysis: Tomlinson should continue his fantastic season next week and will have many opportunities to run against Green Bay. The Packers rank 23rd in opposing rushing yards with offenses averaging 124 yards per game against them. Shonn Greene, the other Jets running back, should also find some running lanes and should see some more time after resting during the team’s bye week.

Analysis: How do you stop the high-octane passing attack of the Green Bay Packers? Coleman and the Jets secondary hope they know as they go up against Aaron Rodgers, one of the best quarterbacks in the league. The Packers passing attack is averaging more than 250 yards per game, and they are starting to heat up: over the past three games, Rodgers has averaged 300 passing yards.

Analysis: Washington did his part Sunday as he had 11 tackles, second-most on the Cardinals defense, and a sack against the Seahawks. His sack came on a third down late in the first quarter that prevented the Seahawks from extending their lead. Most of Washington’s tackles came defending against the run, but the rest of the defense could not stop Seattle’s run offense, as the Seahawks backs ran for 144 yards and had a 4.0 yards per carry average.

Next Week: Washington and the Cardinals take on the Tampa Bay Buccaneers. With the Cardinals offense struggling, it will be imperative for the Arizona defense to stop Tampa’s offense.

Analysis: Hawthorne and the Seattle defense shut down the Cardinals offense as they were able to force five turnovers, four of them being fumbles. The Seahawks kept the opposing offense off the field as Seattle had possession nearly twice as much as Arizona.

Next Week: Hawthorne and the Seahawks will have their hands full against a suddenly alive Oakland Raiders offense. Oakland running backs Darren McFadden and Michael Bush have helped the Raiders become the third-ranked rushing offense that averages more than 150 yards per game. If Seattle can’t stop Oakland early, it will be a long day for the Seahawks.

Analysis: A bye week for the Colts could allow Hughes to understand the defense better. Hughes has been struggling for most of the season and has been inactive for five of the Colts’ seven games. It will be important for Hughes to be on the field for the rest of the season for him to progress in the NFL.

Analysis: Phillips did not accumulate any stats against the Buffalo Bills. The Baltimore defense, known for its hard-hitting and shut-down mentality, looked sluggish against an offense that ranks 28th in the league. The Bills were able to pass for 374 yards and had another 132 yards on the ground as they torched the Ravens defense throughout the game.

Next Week: We may see more of Phillips after this poor outing by the Ravens defense. It is unlikely, however, with a bye week coming up that should allow the defense to sort out its issues.

Analysis: Brown looks to have completed his rehabilitation of his hand injury and practiced for the majority of this week. But with a healthy Jahvid Best and Kevin Smith, it’s hard to imagine that the Lions will use Brown much unless there are more injuries to Lions’ running backs.