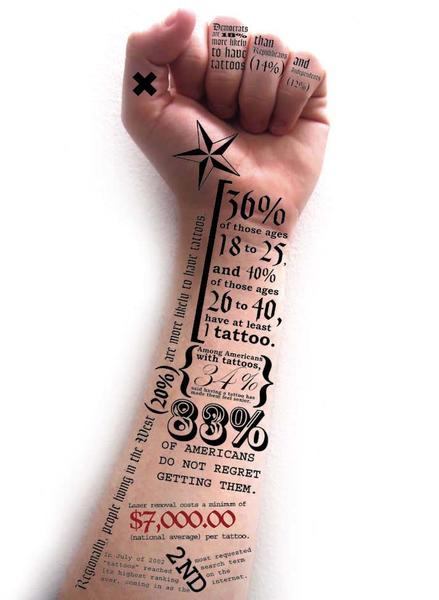 Most who enter the small, dimly-lit
building on a shabby block near the outskirts
of downtown do so with a tinge of
anxiety, though it is often disguised by
confidence.
Framed drawings of tattoos wallpaper the
rooms, the artistic visions of professionals
who earn a living by prickling ink into the
skin of customers. But the images are only
copies of masterpieces whose original canvases
were not paper, but flesh, and whose
instruments were not pencils, but needles.
These sketches can be taken down, but the
marks the needle makes are meant to stay
on their canvases forever.
Tattooing is a tradition rooted in history,
and even its less-extensive life in the
United States is marked by several influential
periods and phases of art. From the
brutish military tattoos that were once so
taboo to the stereotypical “I love mom”
biker tattoo, the popularity of inked body
art has seen its ups and downs.
Chris Brown, an artist at the Salty Dog
Tattoo Shop on Berry Street, described
the recent shift in tattoo trends. He said
in the beginning of American tattooing, it
was an “outlaw thing,” but lately has become
more about the art.
But for the many who view their bodies as
canvases awaiting beautiful masterpieces,
there are just as many, if not more, who
only want to rebel. Brown spoke of this
group, the group that is plastered across
TV screens and has mothers worrying
about their children coming home bandaged
from their latest, all-too-permanent
attempt to be trendy.
Two tattoo artists at Liberty Electric Tattooing
said the impermanence of white
tattoos has been appealing to many young
women lately. Artist Jon Hill said in his
more than 15 years of tattooing, he is now
seeing more young people than ever.
“I probably do about 100 stars a week,”
Hill said.
Brown agreed that geometric shapes and
tiny, hidden tattoos are big right now.
“Girls are coming in here in packs of five
and only one of them is getting tattooed,
and it’s normally like a white star or something
on the toe,” Brown said.
He called these “faux tattoos” because
of the lack of dedication involved in the
decision-making.
“It’s not really a tattoo,” Brown said.
“There is no commitment at all. They want
something that’s going to fade away.”
Brown, who has more tattoos than he can
count, said tattoo history and art is often
lost on this group of people. To them, he
said, tattoos are just a novelty.
“It’s like the prize at the bottom of a
Cracker Jack box,” Brown said. “How
long do you keep that? You tell your
friend you will keep it forever, but in 20
years, where did it go? It’s lost like a loose
sock, like a Zippo.”
Brown said young people’s decisions to
get small, easy-fading tattoos often stem
from a desire to express independence.
“They’re not totally and entirely sure they
want a tattoo,” Brown said. “They want to
feel for a minute that they’re in control of
their life, but they don’t want to live with
the responsibility of that.”
But students who have these types of tattoos
disagree.
Laura Kelsey, a senior advertising/public
relations major, has the outline of three
blue stars on her foot.
“I actually thought about it for a really
long time because I knew it would have
to be something that I would have to live
with for a while,” Kelsey said.
She said the three stars have multiple
meanings. They represent the biggest influences
in her life: her mother, father and
grandfather, as well as the Father, Son and
Holy Ghost. She said she realizes that tattoos
are considered trendy by many, but
said she thought about her design for two
years before deciding to have it inked.
Daniel Shafer, a junior communication
studies major, has a cross and fish in the
middle of his upper back. He also said
he thought long and hard about getting
a tattoo, but said he doesn’t think he will
ever regret his decision.
Brown said this idea of tattoos having a
special meaning is important to him.
The date “1-18-06” is written on his
hand8212;the date his wife found out she
was pregnant. Above the date is a red rose
that he had inscribed the day his daughter
was born.
“That’s for me,” Brown said. “It’s personal
and it’s imagery. It’s an icon.”
But Joe Haasch, who also works at Liberty
Electric Tattooing, said sometimes a
tattoo can just be about art.
“A lot of people think they have to get
something that means a lot,” Haasch said.
He said people often come in with very
complex designs, trying to cram as much
meaning into the picture as possible.
Sometimes, he said, it can just be “whatever
imagery you’re turned on by.”
While the trend for students seems to be
simple tattoo8212;geometric shapes, religious
symbols and the like8212;the, professionals
say the true art comes in the form
of the less-subtle, more intricate pieces.
Whatever a person chooses to get, the artists
agree that once the needle touches the
skin, it changes a person.
“It’s kind of a mythical, mysterious thing,”
Brown said. “Just the energy with me sitting
with you, holding your arm for an
hour and you’re bleeding on me, on my
gloves. That’s like transference of energy.”