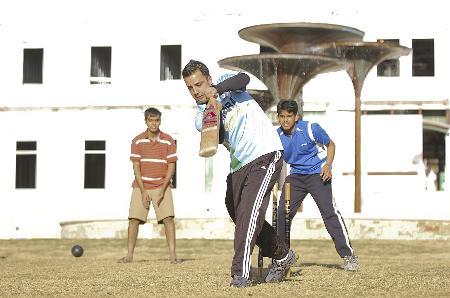 The game of cricket continually fills stadiums in many parts of the world. A group of students hope that creating a club team will raise awareness of the sport a little closer to home.

Nitesh Kalwar, a sophomore accounting and finance major, and 20 other students began playing cricket together last semester, Kalwar said. The players are all experienced but newcomers to the sport are welcome to come play, he said.

The group started with only five people last summer, Kalwar said. He recruited players by simply asking people he saw if they were interested in the sport and if they wanted to play on weekends, he said.

The goal is to have about 80 members total before the group pursues an official status with the university, Kalwar said.

“Creating a club is going to require time in order establish a committee as well as the rules to follow,” Kalwar said. “The numbers that we have right now, 15 to 20, are not good enough.”

Creating a club would also require naming officers within the group, Kalwar said.

“If it gets to the point where we are really serious about a TCU cricket club, a Web site and officers, then we’ll do it,” Kalwar said.

Cultural Awareness, of which Kalwar is vice president, has helped provide daily expenses for balls and tape, while others have donated their own cricket gear, he said.

Jeevan Antony, a sophomore business and anthropology major on the team, called the sport the American football of India.

“A few of us have a long way to go before we become decent players,” Antony said. “But the opportunity itself, the competitive behavior as well as meeting up with our friends on Saturdays for a game of cricket can be a pretty nostalgic trip.”

Students are not the only people taking part in the activity.


Michael Slattery, director of the Institute for Environmental Studies, said he has played with the group as well and is willing to help with funding for the team.

“My plan is to play as much as I can,” Slattery said. “Cricket is a marvelous game and it’s been 20 years since I last played.”

Slattery is no stranger to the sport and brings even more experience to the group. He played in high school as well as in the South African Army and at St. John’s College in Oxford, U.K., he said.