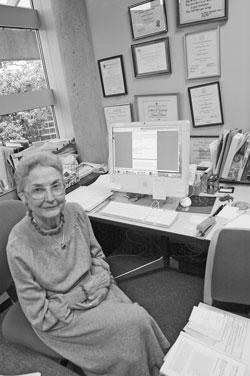 In high school, she sported a fashionable belt that read “Doug.”Now with three textbooks under her “belt,” a Ph.D. and numerous awards, journalism professor Doug Newsom’s name is not the only thing that makes her stand out.

The name Douglas has been passed down through her family. Her father was Jeremy Douglas, and Newsom, an only child, was named Douglas Anne. From an early age, she was simply called Doug. She said her full name was used only by her mother when she was in trouble.

Now, her first son is named Michael Douglas and her first grandchild is Landon Douglas.

As a child, she went by “Little Doug” because she shared the name with her father. Newsom said when boys began to call her house and ask for her, they had to specify which Doug was being requested.

Since then, she wrote the first media writing book ever published in the early 1970s. Frank Lewis, a former student, told her there were no useful textbooks for media writing and suggested she write one. So she did.

As a professor, some students said her courses are difficult. Newsom’s response is that “perception is their reality.”

Her tests and group projects are designed to prepare students for the real business world. Newsom joked that students should not be intimidated because she wrote the textbooks for her classes – especially because she only receives 13 cents for each copy sold.

“She is a lot more down-to-earth and she is an extremely intelligent woman,” said Katelyn Porterfield, an advertising/public relations major who attended the journalism program in London with Newsom last summer.

Newsom has served on numerous committees, given many lectures and written several textbooks. She is retiring from teaching in May 2009, but said she plans to continue writing and giving lectures.

Multiple universities are currently using textbooks written or co-written by Newsom. “This is PR: The Reality of Public Relations,” “Public Relations Writing: Form and Style” and “Bridging the Gaps in Global Communication” are three of her books used at TCU.

Newsom also said she does not need to be called “Dr. Newsom” or “Professor Newsom.” She is fine with just being called Doug. She said once students graduate, they will become her colleagues.

She dedicates all her books to students because they hold the future for the journalism world, she said.

“When I go to bed every night, I think of what I’ve learned during the day that I didn’t know before,” Newsom said.