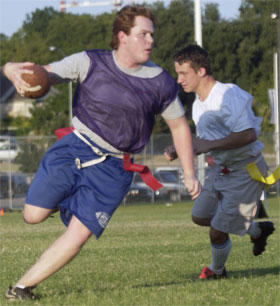 There is more than one football team on TCU’s campus.The intramural football season started Monday, and there are 87 men’s, women’s and co-rec teams signed up to play this year.

“This is the highest we have ever had,” Cristie Carpenter, assistant director intramurals and sports clubs, said Tuesday. “Intramural football is the biggest sport we have in the fall.”

Why are there so many people playing intramural football?

Teams are generally a group of friends, organizations, or fraternities and sororities.

“Intramural football gives me something to do in my free time during the week,” Spiegel said.

Besides playing intramural football for competitive reasons, people play to get to know people.

Allison Osuniga, a freshman health and fitness major, said she is playing intramural football to get to know members of her sorority, Eta Iota Sigma.

“I also want to get to know some of the BYX guys, who are also on the team, since they are close to the members of my sorority,” Osuniga said.

“I enjoy being active,” Wilson said. “I played basketball and swam in high school and participating in intramural football helps competitive spirit alive.”

Wilson, who is a transfer from Drury University in Springfield, Mo., said intramural football at TCU is much better than it was at Drury.

“The intramural fields didn’t have light, and we had to play all of our games before dark,” Wilson said. “There were no official field markers, and there was a lack of organization. It is more serious at TCU.”

Carpenter said TCU has a good number of teams for being a private school.

Students act as referees for flag football, and to ensure every game goes smoothly, Carpenter said, each official goes through an extensive training session.

“There are official clinics as well as rulebooks and handbooks that are passed out to the officials,” Carpenter said. “The officials go through training in classrooms, on the field and scrimmages.”

Carpenter said all of the supervisors are first aid and CPR certified.

Tricia Alexander, a junior anthropology major and an intramural supervisor, said she enjoys officiating, but participants give her a hard time because she is a woman.

“I know the rules,” Alexander said. “I have been trained.”

Carpenter said she would pay the entry fee to the regional championships at the University of Texas at Dallas for the winners of the men’s, women’s and co-rec leagues.