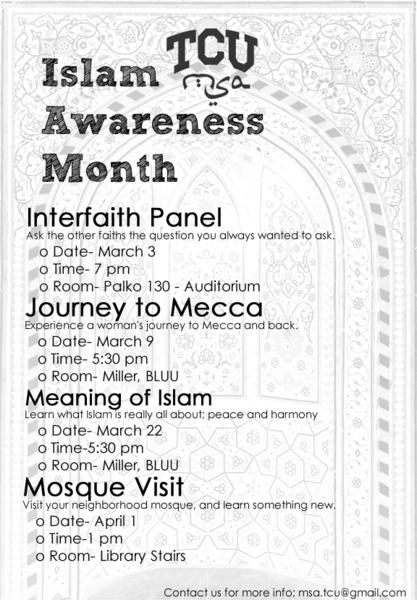 The Muslim Student Association will kick off the university’s Islam Awareness Month with an interfaith panel Thursday where representatives of other religions will have an open Q&A session about interaction between religions, vice president of MSA and junior pre-med major Zair Shah said.

“In the end, hopefully we can teach students more about what Islam truly is and just make the campus more aware,” Shah said.

Political science professor Manochehr Dorraj said people of different faiths sitting around a table talking to each other are more likely to find their similarities than their differences.

“People see religion as my way or the highway,” Dorraj said. “It’s not that. Religions have more in common than they have differences.”

In previous years, the university had a week of events promoting Islam awareness. This year, the events will take place over an entire month.

Religion professor Yushau Sodiq said, “This year we want to separate everything, so people can come to as many [events] as possible. In the past we crammed everything into one week.”

Sodiq said he thinks the new format will help improve the attendance at the events this month.

“In the past attendance has been good,” he said. “But with a whole month we want attendance to be great.”

Sodiq said he did not know specifics of attendance in prior years.

The other events during the month will include discussing a trip to Mecca, learning about the meaning of Islam and visiting a local mosque.

Shah said he hopes the events will give students a different perspective on the religion, separate the ideas of Islam and violence and help other students recognize the true virtues of the religion.

“The goal is for students to come to any event and know just a bit more about it than before,” said Shah. “This way when people hear some of the negative stereotypes, they can disregard them.”

Katie Horton, a sophomore pre-business major, said she planned to attend some of the events. She is currently enrolled in a Middle Eastern politics class and said she hoped some of the material in the class would correlate with the information shared by MSA.

Horton said she wants to learn about the effects the Islam has on politics as well as the history of Islam. She hoped there will also be some discussion on the recent political revolutions in Egypt, Tunisia and the current situation in Libya, she said.

“I feel like that is the issue most people know about right now,” Horton said.

Dorraj said he hoped the events in the Middle East would be mentioned some time during the month because they shed positive light on Muslims around the world.

“All of the protests in the Middle East were peaceful until the state brought upon violence,” he said. People can see Muslims creating change peacefully, which is something that isn’t often in the media.”

What: Discussion between people of various religions

What: Discussion about a woman’s journey to Mecca

What: Learning about the teachings of Islam

Where: Meet at the library stairs

What: Visit to a local mosque with MSA