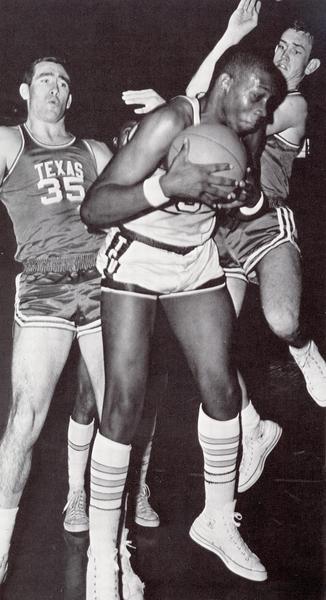 Dr. James Cash Jr. was the first African-American to be a full professor at the Harvard Business School, but his first impact on racial integration came on the hardwood at TCU. Cash, also the first African-American to play in the Southwest Conference in 1967, will have his No. 54 jersey retired on Jan. 29 at Daniel-Meyer Coliseum during halftime of the TCU-Air Force game.

Cash, who has already been inducted into the TCU Lettermen’s Association Hall of Fame, received 92 scholarship offers before he chose TCU.

Cash said, “TCU was a strong participant in the social revolution of the “60s. My time at TCU was a transformative experience. I’m very honored to be recognized by my alma mater.”

Cash became one of 30 Horned Frogs to tally 1,000 points over the course of his career while also averaging 11.6 rebounds. He’s also in the top five in TCU career points and rebounds leaders. Cash lettered from 1967 through 1969 and led TCU to a SWC championship in 1967-68.

“Imagine what he had to endure being the first African-American athlete in the Southwest Conference, what he had to endure [at] home and on the road and the courage it took for him to do that,” Christian said. “I just think there’s a lesson to be learned for everybody in what he’s done…[it] transcends basketball. It’s TCU. He’s the perfect representative of this university.”

Off the court, Cash was an Academic All-American and graduated TCU with a bachelor’s degree in math. He went on to earn a master’s and Ph.D. from Purdue before becoming the first African-American full professor at the Harvard Business School, where he helped build the school’s computer-based technology curriculum. He served in various posts at Harvard until his retirement in 2003.

“On behalf of TCU we are really thrilled to be honoring a perfect example of a scholar athlete in Dr. Cash,” said Chancellor Victor Boschini.

Cash is now a member of several boards of directors, including Wal-Mart, General Electric, and the Chubb Corporation. He has also served on the boards of Knight Ridder, Microsoft, Alcon Labs, and Tandy Corp, later renamed Radio Shack. He also serves as a trustee of the Bert King Foundation, Massachusetts General Hospital, Partners Healthcare and the National Association of Basketball Coaches Foundation. Cash is also joint-owner of the Boston Celtics, having joined the group that purchased the team in 2003.

“He’s that successful in life, he’s everything TCU embodies and I just hope everybody understands and comes out and pays homage to this man for what he’s actually done coming out of TCU,” Christian said. “The basketball game just happens to be an event of a sport he played. For what he did here, I think every athlete needs to be at the game, I think every student should come pay homage to this man, not to support our basketball team but to support this guy.”