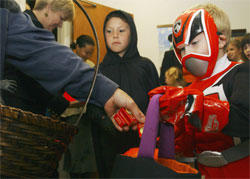 The cold Halloween winds brought chills to Worth Hills, but the sounds of kids’ giggles prevailed.This year’s Junior Panhellenic Chills in Worth Hills fall festival and philanthropic event brought children of TCU faculty and staff as well as the Alice Carlson Applied Learning Center and Tanglewood Elementary School to the Worth Hills Rose Garden Monday night.

Junior Panhellenic is a subdivision of Panhellenic geared toward teaching freshmen and sophomore sorority members how to become leaders, said Stephanie Williams, program coordinator for Campus Life and Panhellenic adviser.

Elizabeth Nearburg, the president of Junior Panhellenic, said, “We are not only giving back to the community, but we get to give back to our philanthropy, too.”

Pumpkin and spider crafts and cookie decorating were just a few of the activities at the event.

Nearburg, a junior nursing major, said TCU’s sororities and fraternities were invited to set up a themed booth and provide an activity and prizes for children on Halloween.

Williams said this is the third year for the event and is different from Colby Halloween in that there are carnival activities and booths run by different sororities and fraternities.

Of the sorority members who participated, many said they enjoy being a part of the festival for a variety of reasons.

Kristen Schropp, a freshman business major, at Chi Omega’s pumpkin beanbag-toss booth, said she enjoyed being a part of the festivities because the children remind her of her little sisters.

“We usually don’t get to see little kids because we’re surrounded by college students all the time,” Schropp said.

Other students who participated said the event helped them get more involved.

Meredith Kiesel, a freshman biology major, said most of the events within her sorority are run by the whole chapter, and, as a result, students don’t always get to play a vital role in the planning.

This event was different.

“We get to plan it ourselves and have more individual participation,” Kiesel said.

Children dressed in costumes such as ninjas, cowboys, witches and princesses shouted and smiled as they played games at the booths.

Andrea Holliman, a TCU alumna, whose son was dressed as Batman, said it was her first time to attend the event and said the event allows her son to have a fun and safe Halloween.

“My son can do this and (trick-or-treat on) his street and feel like he’s done a lot,” Holliman said.

Nearburg said the proceeds from the $15 booth fee, T-shirts, bracelets and clothes and toiletry donations will go to the Women’s Haven of Fort Worth, a shelter that provides assistance to victims of domestic and family violence.