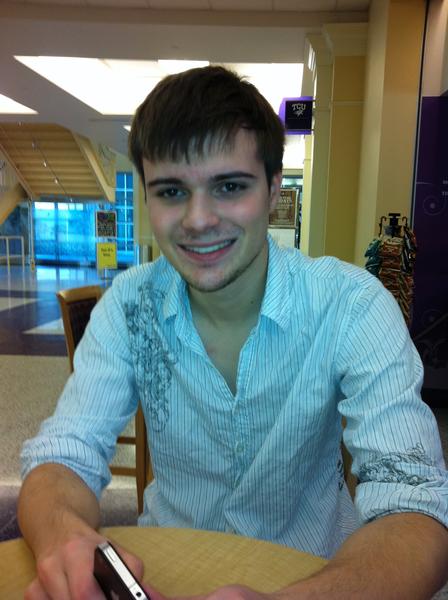 In the process of setting the West Berry Block Party into motion (his own idea, by the way), junior Ted Wick tells a little bit about his past with music. He said he is no rookie to planning gigs or the music business. He said hoped a lot of people would come out to the show April 16, and if all goes well he plans on making it an annual event.

Where are you from originally?

“Originally I am from Toronto, Canada, but I’m mainly from Houston. I only spent the first eight years of my life in Toronto. I spent my high school years in Houston, and my parents live in Minneapolis now. I have identity crisis problems all the time now with where exactly I am from.”

What are you currently studying at TCU, and where do you hope it takes you?

Have you ever planned an event like this before?

“Yes I have. I started booking local rock shows for local and regional bands back in high school. I believe it was my junior or senior year in high school when I started that. Then I started a band at that time and the guitar player, who is my best friend, his dad started noticing what I was doing and he brought me over to the night club business. I started booking 18-and-under nights when I was 18. Then I moved on from there to 18-and-up nights. That was all two summers ago and then last summer that’s what I was doing, I mean I was bringing in thousands upon thousands of people. I still continued the music thing and doing a bunch of shows. What I really realized is that I hated the night club and I wanted to focus all my time on doing music shows.”

How did you first get involved with music?

“I guess it started when I was in eighth grade and I started going to guitar lessons. I have always been in love with music, and it has always been my goal to do something in the music industry, if possible. It’s a very hard industry to get into, and that’s why I’m going to college because I want a back-up plan. I don’t consider strat-comm a back-up plan or plan B or anything, but I really want to do music. So, I got into that, and freshman year I formed a band out of high school, and I’ve been in two bands.”

Are you currently still in a band?

“No, I gave up that. It’s too much drama. I manage bands still. Currently, I manage a band called Collective Dreams. I also manage another guy, Josh Stallings.”

What kind of music do you prefer personally?

“My favorite genre would be alternative rock/indie rock. My favorite band of all time is Tool. Then No. 2 would be Dance Gavin Dance, and then I think No. 3 would probably have to be Circa Survive or Type O Negative.”

Did you have any major influences in your decision to pursue music?

“It was my parents basically telling me that I couldn’t do it. That was a main one. I’ve kind of always wanted to prove them wrong. I think the other person that was a major influence is Peter Steele, the lead singer of Type O Negative. They were a big band in the 90s and then kind of fell off the face of the earth. Fun fact is they were the first band to hit platinum on Roadrunner Records which was the record company that ended up signing Slipknot and Nickleback. Had that not happened, you wouldn’t have heard bands like Nickleback and Slipknot.”

What do you hope to see come out of the West Berry Block Party?

“I hope we have like an Austin City Limits or Lollapalooza-type music fest here in Fort Worth… It’s a music fest in Fort Worth, I mean it’s a great city. If you look around all this art that’s here right now is done by Fort Worth artists. We have a ton of great bands, and I think we have a great art scene here and I think it needs to be exposed. I think people forget because we are so close to Austin how great we are. I want WBBP to become big enough so that people recognize the art’s here.”