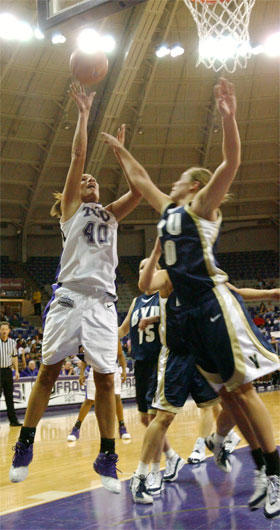 The Lady Frogs ended their three-game stint in the Women’s National Invitation Tournament with a 66-36 win over the Delaware Blue Hens. TCU beat Radford in the first round, but lost in the second round to No. 4 LSU and played Delaware in the tournament’s consolation round. Delaware beat Delaware State in its first game, but lost to No. 3 Maryland in round 2.

Senior Jenna Lohse had several reasons to celebrate tonight: a 30-point victory, a leading score of 13 points and her 23rd birthday. Although Lohse lost both tip-offs to Delaware’s 6-foot-4-inch center Farrah Ferguson at the beginning of the game, she would not let that dampen her spirits. The 6-foot-2-inch forward started the night strong scoring 11 points in the first half. Lohse scored a total of 13 points.

Although the Lady Frogs stayed ahead of the Blue Hens with a 32-15 lead at the end of the first half, head coach Jeff Mittie said he wasn’t pleased with the team’s overall performance.

“I think things were so easy that we got sloppy,” Mittie said.

He said his players have gotten used to playing each other during practice and were challenged by the way their opponents played.

“I told them during halftime that I wasn’t happy,” Mittie said. “I told them they looked frustrated and needed to settle down.”

Mittie said shooting the ball and personal fouls were his biggest concerns during the game. Despite making only 35 percent of their shots, the Lady Frogs continued to extend their lead to as high as 32 points. Personal fouls kept senior guard Adrianne Ross and junior center Micaela Younger from a lot of play time in the second half.

Mittie said some of the positive points of the game were the team’s early lead and its defense, especially in keeping up with Delaware’s guards and putting pressure on them.

Lohse said she was impressed by freshman forward Helena Sverrisdottir’s performance and called her a “great addition on the team.” Sverrisdottir scored 11 points with 4 rebounds and 6 assists.

Mittie said the upcoming games are an “important stretch for us” with a lot of tough teams to go up against.

He is still trying to get a “feel for this team,” he said, but he said he felt the team will be good defensively. At this point, he said he wants his players to learn from each game and apply those lessons in future games.

The Lady Frogs will be on the road this week and will face SMU (1-1) at Moody Coliseum on Tuesday.