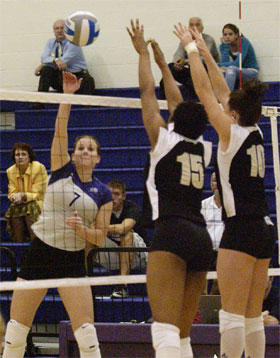 After knocking off Wyoming, the Horned Frog volleyball team travels west to face two conference teams.The Frogs head to Nevada-Las Vegas on Friday night to take on the Rebels and San Diego State on Sunday for a matchup against the Aztecs.

Head coach Prentice Lewis said all the teams in the conference are evenly matched.

“We have to come ready to play,” Lewis said. “On any given night, it can be anybody’s match.”

The Frogs are currently 12-7 on the season and 2-3 in conference play.

Sophomore Talaya Whitfield should also help the Frogs this weekend after recording 22 digs in TCU’s victory over Wyoming.

“This weekend we just need to play our game,”Whitfield said. “We can beat both teams as long as we are aggressive.”

The team faces two strong opponents this weekend in both the Rebels and the Aztecs.

UNLV is 4-1 in conference play after a 3-1 home victory over San Diego State on Oct. 7.

The all-time series between the Frogs and the Rebels is tied at one, with each team taking a victory at home.

San Diego State will also be a tough match Sunday for the Frogs. The Aztecs, however, head into the weekend with a two-game losing streak. With their loss Tuesday, the Aztecs fell to 11-7 on the season (3-2 MWC).

The Aztecs hold a 2-0 all-time series lead against the Frogs.

“Both teams are evenly matched,” Hampton said. “We are just going to take them one game at a time.”

With conference action in full swing, the Frogs are ready to get back on the court, Lewis said.

“The MWC is much tougher than Conference USA,” Lewis said. “These games could help with our standings, but there is no guarantees in this conference.”

GoFrogs.com contributed to this report.