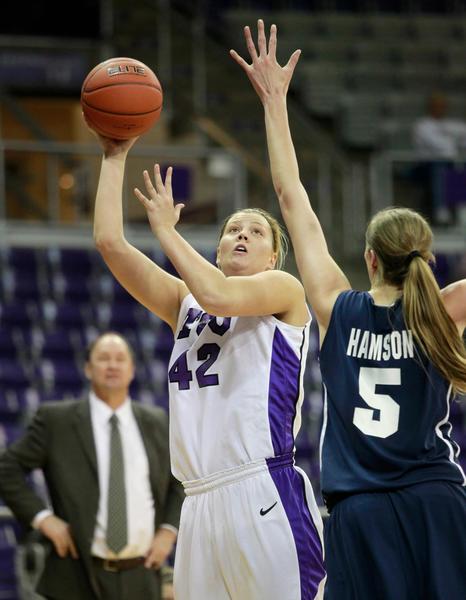 With the shot clock winding down, freshman guard Briesha Wynn had nowhere to go and threw up a prayer.

The shot banked in off the glass and gave TCU a crucial four-point lead with 1:11 remaining in the game.

It was that kind of night for the Lady Frogs – ugly, but rewarding nonetheless.

The Lady Frogs only shot 29.8 percent for the game, but managed to hold BYU to 32 percent shooting in the second half while forcing 17 BYU turnovers.

TCU head basketball coach Jeff Mittie said it was just one of those nights and that his team could never get in sync.

“You got to give BYU credit defensively because they really took us out of everything we wanted to do,” Mittie said. “Even when it looked like we had numbers, their group really covered out well to shooters. I thought they played a great defensive game, and I thought our players did as well.”

The Cougars’defense in the opening minutes forced the Lady Frogs to miss seven of their first eight shots. Senior guard Jazmine Foreman’s jumper gave BYU an early 11-5 lead with 14:56 left in the first half.

But things didn’t get any easier for the Lady Frogs. BYU responded with an 11-1 run over the next six minutes, capped off by a three-pointer by senior forward Coriann Fraughton.

After trailing by 10 with with under two minutes left, the Lady Frogs scored the last eight points of the half to cut the BYU lead to 30-28.

Sverrisdottir took over answered, scoring eight of the next 12 TCU points to give the Lady Frogs a 40-38 advantage with 11:51 left to play.

Another BYU layup by Hamson and a three-pointer by senior guard Mindy Bonham put the Cougars back up 43-40, but that would be BYU’s last lead.

After a jumper by TCU senior forward Micah Garoutte, Carter drained a three-pointer on the left wing to put the Lady Frogs ahead, 45-43.

“Fortunately that shot doesn’t go in,” Mittie said. “It hit every part of the rim to go in, and if it does go in we’re in overtime. We’re fortunate to win it.”

The Lady Frogs remained perfect in 2011 and are three wins away from finishing the first round of conference play unbeaten.

“We’ve come far, but obviously (we) have a lot of work ahead of us,” Sverrisdottir said. “I’m just really pleased that we were able to come out with a win because we didn’t play very good.”

TCU travels to Salt Lake City to take on Utah Saturday night at 7 p.m. CT. The game will be aired on CBS College Sports.