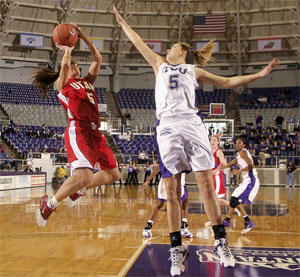 The Lady Frogs may find themselves looking in the mirror Thursday evening when they face the University of Nevada at Las Vegas (12-6, 4-3), a team head coach Jeff Mittie said is similar in some ways to TCU. “They’re more like we are in that they attack off of the dribble,” Mittie said. “They run a lot of motion offense … they put the ball on the floor.”

The Rebels penetrating attack is led by senior guard Sheena Moore, who leads the team in both points (13.2) and assists (3.6) per game. Mittie said Moore is the central figure in UNLV’s ability to break down defenses.

“Moore is probably the threat to take you off the dribble,” Mittie said.

Sophomore guard Adrianne Ross said the Rebels have a fast-paced style of play, which differs from the rest of the more slower-paced Mountain West Conference.

“They’re very athletic and more up-tempo,” Ross said. “That’s what will be the challenge.”

For all the Rebels’ strong guard play, the team is a legitimate inside-outside threat. Senior forward Sherry McCracklin, a 6-foot, 2-inch player who also sees minutes at center, is the only other Rebel averaging double figures in points (10.7.).

However, the Rebels have struggled shooting the ball from beyond the arc, and are hitting at a weak 27 percent. This deficiency is a welcome breather for the Frogs, who have had difficulty guarding against the three, evident by their opponent’s long-distance shooting average on the season: 36 percent.

Mittie said the Frogs have already played teams like UNLV.

“It will be interesting,” Mittie said. “I would compare to them (the University of Texas at Arlington), and we did a nice job against them.”

Mittie said UNLV uses its athleticism to frequently change up its style of defense.