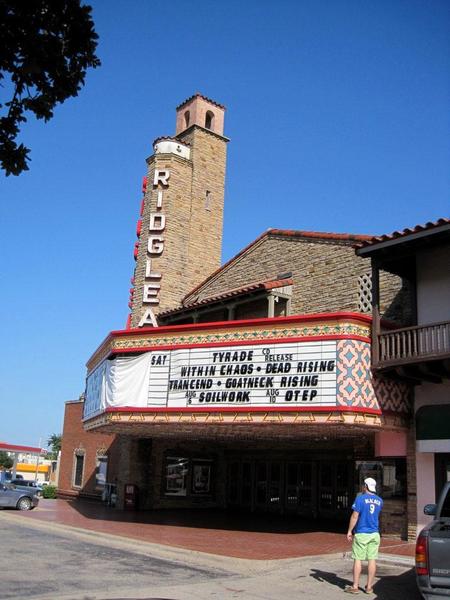 On the west side of Fort Worth, the Ridglea Theater used to be the place to go to see a movie, take a date or to come spend time in the air conditioning. Currently, it is home to a concert venue.

Construction of the theater began in 1948 and it opened in 1950, but Bank of America is currently considering purchasing the 60-year-old theater to turn it into a bank branch. There are 21 Bank of America ATMs or branches within five miles of the Ridglea Theater, according to the Bank of America website. The building itself is within eyesight of one.

"We got this building on a whim of mine," Van Zandt said. "I used to do laser shows and I just wanted a place to do them and this opened up."

Van Zandt said he and Hathaway should have left the building for financial reasons, but decided to stay after falling in love with the space.

"It wasn't so much about what we're doing8212;it's about where we're doing the event," Van Zandt said. "Being here in the Ridglea meant more to us than making money."

David Rockaway, president of FixFunding, which currently owns the Ridglea Theater, said talks with other potential buyers lead the company to conclude that Bank of America had the best capability to pay and care for the building.

Executive Director of Historic Fort Worth Jerre Tracy said the theater and office space were part of an Urban Village8212;a mixed-use concept that incorporates entertainment, office, retail and living space into a small area.

"The Ridglea Theater and office building were ahead of their time because they were constructed as mixed-use. However, the bank proposal is just for one use…a bank," Tracy said.

Fort Worth City Council member W.B. Zimmerman said the Bank of America plans would probably include tearing down the back wall of the theater and all of the office space on the west side that belong with the theater.

"From the tentative plans we've heard, Bank of America definitely is going to keep the front of the building, including the tower and the marquee," Zimmerman said.

In response to the modeling decision, a petition on-site at the Ridglea had more than 2,000 signatures opposing the changes. An opposition Facebook group had 8,488 members and the "Save the Ridglea Theater" fan page on Facebook had 763 "likes" as of Wednesday evening.

Hathaway said many people had come to her appealing the changes with their personal stories.

Van Zandt and Hathaway's lease lasts through June of next year, at which point the new owners would take over the building. While Bank of America has an agreement to purchase contract on the theater, others would like to buy the building should the deal fell through.

Levi Weaver, creator of the advocacy site RidgleaTheater.org, said he originally just wanted to help people get their opinions known about that was going on with the theater. Later, he began hoping that if the deal fell through, he could get the chance to purchase it.

"Originally, my wife and I decided to see if there was anything we could do to save the theater because it has a lot of sentimental value to us," Weaver said. "The response has been overwhelming that the building means a lot."

After he and his wife were married at the theater, Weaver said he would like to take over and operate the space. He said he believed a bank would not be the best use for the building.

Van Zandt echoed Weaver's sentiments, saying, when he became owner of the building, he had not planned to outlive the historic theater.

"I had a realization about three weeks ago," Van Zandt said. "I was going through the building, just shutting the place down, and as I'm going around and checking all the doors and turning lights off, I realized that at some point, I might be the last person to turn these lights off, and to go through and lock up these doors."

New Providence Capital representative R. Mark Pitzer said he thought one major problem with the building's current state was the lack of parking. The lease on the parking lot behind the theater was defaulted by the previous owner, he said.

"There isn't the necessary parking and without any parking the building is basically unusable," Pitzer said.

If the theater was not sold, he said, it would become an abandoned building in the neighborhood.