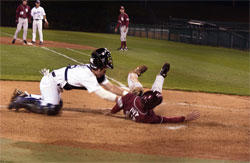 After getting the recent six-game winning streak snapped by Baylor Tuesday night, the TCU baseball team will travel to Salt Lake City on Friday where it will play the University of Utah Utes in their last three road games of the season. The Horned Frogs (34-11, 15-2) gave up three runs to Baylor in the second inning- the only runs of the game giving TCU its second home loss this season.

“The more I watched the game on television the more I have an appreciation for what he did,” Schlossnagle. “But at the same time that’s just baseball. We’ve been swinging the bat well for a long time and it was just one of those nights where it wasn’t happening for us.”

Junior pitcher Chance Corgan said even though TCU struggled at the plate, the team played well and doesn’t need to change anything.

“Yeah last night was a rough night for us at bat, but that was probably their pitcher’s best game of the season,” Corgan said. “So our hitters shouldn’t change anything. They’ve been hitting pretty much every pitcher hard all season.”

While the Horned Frogs remain in first-place in the Mountian West Conference and ranked No. 23 in the country by Baseball America, Schlossnagle said the Utah series will be an important and difficult contest.

“The Utes are playing with a lot of confidence and they are in shooting distance of catching us,” Schlossnagle said. “It’s going to be a dogfight all weekend.”

While the Utes (21-22, 9-6) are in fourth-place the conference, they trail TCU by just five games and are coming off a series victory against UNLV in Las Vegas.

“I think they’re going to give us a lot of trouble,” Schlossnagle said. “They’re also probably as good a coached team as there is in our league.”

In Salt Lake City this weekend the weather is forecast to be cold and wet- conditions that Schlossnagle said “usually favor the weaker team.”

The last time TCU faced the Utes was last May when they won the series 2-1.
TCU is 11-2 against Utah in the history of the two schools.
“They’re going to make it hard on us.” Schlossnagle said. “This is a series we’ll have to take seriously.