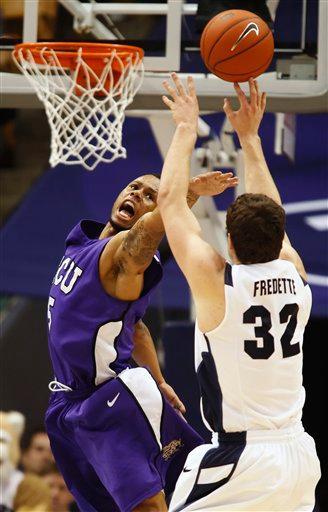 Junior guard Ronnie Moss has been suspended indifenitely from the TCU men’s basketball team, according to a TCU Athletics release.

Moss, a Fort Worth, Tex. native out of Christian Life Academy, was TCU’s leading scorer, averaged 15.7 points per game, 3.5 rebounds and 3.6 assists in 20 games with the Frogs this season.

“Ronnie is suspended indefinitely for failure to adhere to the standards of our program,” head basketball coach Jim Christian said in the release. “Our focus will turn to the active players on our team and finishing up the remainder of our season strong.”

TCU dropped to 10-12 overall and 1-6 in Mountain West Conference play after a 71-46 loss to New Mexico Wednesday.

Moss did not play in the UNM game due to personal reasons, according to TCU Athletics. The Frogs struggled offensively without Moss, shooting 33.9 percent from the field from the game, and 30 percent in the second half against the Lobos.

It is the second Frogs’ player to be kicked off the team in January. Christian kicked Sammy Yeager, TCU’s third-leading scorer, off the team January 11. The Modesto, Cal. native and Weatherford College transfer averaged 9.3 points per game for the Frogs before he was removed from the team.

TCU plays Air Force at 5 p.m. tomorrow at Daniel-Meyer Coliseum. The matchup will be televised live by CBS College Sports and broadcast on 88.7 FM (KTCU) and 820 AM (WBAP).