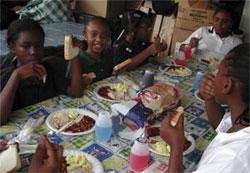 Since Hurricane Katrina, Robinson, 57, has housed – at least temporarily – about 80 relatives in her 2,800 square-foot house in Grand Prairie.

“It’s just something I’m supposed to do,” Robinson said. “It’s not heroic.”

“I tell her every day I thank God for her,” Williams said.

Or tell it to the 8-year-old boy the family calls “Dough Boy.” He said he tells Robinson every day that he is thankful God gave her to him.

Robinson said the first wave of people arrived the Saturday after the hurricane hit, and she said they just kept coming.

“People were sleeping everywhere, anywhere they could find: bath tubs, on the floor, outside on the patio, couches,” Robinson said.

Robinson is one of 18 children, and said she is the only one who left New Orleans.

“That’s why I say God had this is in the plans,” Robinson said. “There is a reason we are all here. He is bringing us together.”

Of the 18 siblings, 15 found a place in Robinson’s house, along with their children and grandchildren.

Robinson’s son, Richard, who currently has 15 people living in his Southeast Arlington house, said his relatives feel they are a burden.

“They aren’t,” he said. “It’s just more people in my house, but we are all family. We are so tight-knit.

“When they needed somewhere to go, there was no question. I don’t care if I have to give up my bed. That’s just the way I was raised.”

As of last Thursday, Geraldine Robinson said she had 13 people still living in her house. Relatives were also staying in 47 hotel rooms nearby.

The hotels gave the families vouchers for 14 days, and those two weeks ended this past Sunday, Robinson said.

“If they don’t have somewhere else, they will all be back here,” Robinson said.

Robinson welcomes them with open arms and with some outside help.

An anonymous woman donated $500 to the family in memory of her father. The woman’s father believed “when somebody comes, you just roll over and make room for someone else,” Robinson said. The woman thanked Geraldine for living by this family motto.

This donor was one of many who brought monetary donations and other goods to this family of 80. Geraldine said she had so much toothpaste and so many toothbrushes donated that she passed some on to the Mission.

Fortunately, the family did not lose anyone in the hurricane, Geraldine said, but it is nonetheless a stressful situation.

“Cooking breakfast – by the time you were finished it was time for lunch. It was around the clock,” Geraldine said.

“It’s the pretendin g you are happy. The kids don’t know.”

The children who filled the back porch at meal time seemed in high spirits, excited about the prospect of snow in the winter and talking about hula hoop contests. One girl pointed out the size of Texas Toast saying, “This would be two pieces of bread in New Orleans.” She then bit the bread to resemble the shape of Louisiana.

Williams said when she and other family members went back to New Orleans to see their houses, they just sat and cried with each other for the first hour or two.

She said the houses were a mess, the carpet was like mud, and the clothes left behind were mildewing. There was also a curfew enforced by the police and military officials. They couldn’t drink the water, the electricity was out and “the alligators walk the streets like dogs and cats.”

“There is always a silver lining,” Geraldine said quietly as Williams relives the visit home.

“I won’t complain. We made it. We did it,” Geraldine said.