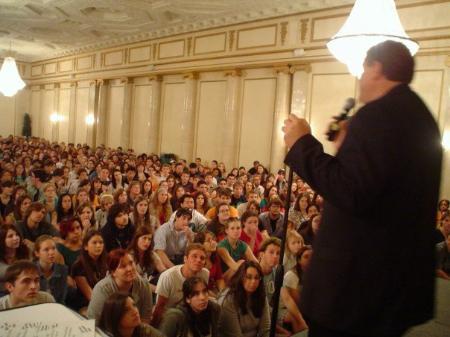 The doctor is in. The love doctor, that is.

David Coleman, otherwise known as “The Dating Doctor,” said he will give students advice Sunday in the Brown-Lupton University Union Ballroom for a sure-fire way not to screw up Valentine’s Day.

He said the reason Valentine’s Day appears in red on most calendars is not to symbolize romance or love.

“It’s to symbolize the blood that has been shed by every man that has screwed up the holiday,” Coleman said.

“After the program, they’ll think differently about relationships,” Coleman said.

Kelsey Lemm, coordinator of Fraternity and Sorority Life, said Coleman is well-known among people involved with student activities and Greek life, and that his program encourages healthy relationships.

Fraternity and Sorority Life originally planned to bring Coleman to speak to Greek students but decided to open the program to all students, Lemm said.

“It’s so important for students to know what they’re looking for,” Lemm said.

“I’m really interested to see how he explains dating from a guy’s perspective,” Pipkin said. “Sometimes guys act so weird, and we misinterpret their behavior.”

What: Relationship advice with David Coleman

When: 7 p.m. Sunday
Where: BLUU Ballroom
Admission: Free to all students

“I don’t know if it’s something I would make time for,” Sullivan said.

Freshman business major Linnette Romero said hearing another person’s opinion about dating would be really interesting and would benefit students.

“It’s very fun, and I seem to help people quite a bit,” Coleman said.

Coleman said his audiences are involved in his programs. He said he guarantees that everyone will leave with useful knowledge about dating by allowing audience members to interrupt his program to ask any question they may have.

Lemm said the BLUU Ballroom will be set up for maximum capacity.

According to his Web site, datingdoctor.com, Coleman has won National Speaker of the Year 11 times. He has also been awarded seven times by Campus Activities Magazine and three times by the National Association for Campus Activities.