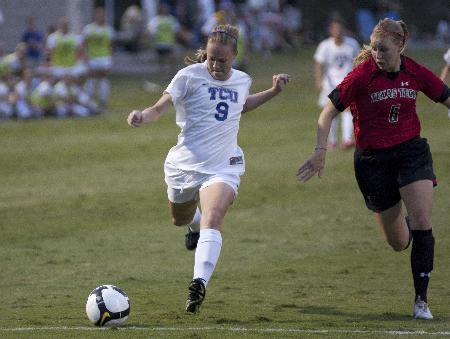 The nationally-ranked women’s soccer team moved to 4-3-0 after this weekend’s matchups in Colorado.

Friday’s game against the Colorado College Tigers gave the Lady Frogs their second loss of the 2009 season with a score of 3-0. Their first loss was after the 4-3 double-overtime loss to Texas Tech University.

The Tigers’ forward Brittney Lyman scored the first goal midway through the first half, which left the Lady Frogs struggling to put points on the scoreboard. Lyman scored again in the 56th minute. Tigers teammate Tiffany Brown scored four minutes after Lyman to put TCU at a 3-0 loss for their first night in Colorado this season.

The Lady Frogs were outshot by Colorado College 18 to 8 for shots-on-goal.

“The very positive thing that came out was how we responded from Friday to Sunday,” TCU head coach Dan Abdalla said. “So now we’ve just got to do things at a consistent basis.”

Sunday’s game put points on the scoreboard for TCU against the University of Denver.

Two quick goals were scored before halftime, first by Denver, then in the 11th minute by TCU sophomore Kristen Halverson.

TCU grappled with the increasing points on the Pioneers’ side of the scoreboard, still stuck playing catch-up to a Colorado team as Denver upped the ante with another goal in the 31st minute. Roughly 10 minutes later, Horned Frog Jordan Calhoun followed with a goal before halftime.

Calhoun’s goal was the last of the weekend for TCU after Denver’s Kelli Breidenbach scored the last goal of the game in the 52nd minute, ending the match 3-2.

“We’re expending so much energy trying to get back into a game, we’re not giving ourselves a fair chance to be able to just play the way that we need to be playing,” Abdalla said. The altitude training would prepare them for games later in the season against Utah, Abdalla said.

The next game, Abdalla said, would be exciting because previously injured players Cheryl Martin and Nikki Wilbur would be back to full health.

TCU will face the Weber State University Wildcats at 5 p.m. Friday in Lubbock.