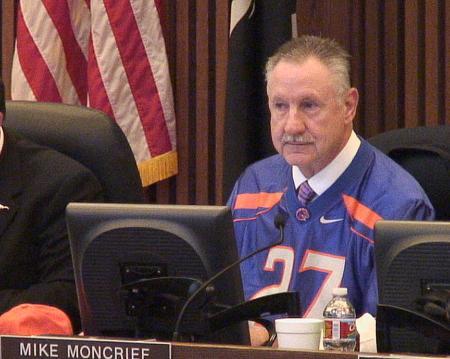 The mayors agreed that whoever supported the Fiesta Bowl’s losing team would have to wear the winning team’s jersey and hat to the next City Council meeting and be photographed as proof. Because TCU lost 17-10, Moncrief donned a Boise jersey and hat.

“I hadn’t planned on wearing a Boise jersey and cap to the council meeting, but at the same time, I doubt that Mayor Bieter had planned to wear a TCU jersey or cap,” Moncrief said prior to the meeting.

The bet was Moncrief’s idea and he presented it to Bieter, who was “more than willing” to agree to it, Moncrief said.

“I thought there had to be some kind of wager between the mayors of the two cities and I thought, ‘Do we bet that we’ll provide them barbecue and they provide us with potatoes?'” Moncrief said. “I decided it would be more visual for us to have the bet with the opposing team’s jersey.”

Before the meeting’s invocation by TCU Campus Minister Angela Kaufman, Moncrief said, “We need your prayers, especially [with] me in this uniform.”

He was even more conspicuous preparing for the photo as he was surrounded by the varying degrees of purple attire worn by City Council members, including a TCU hat worn by Mayor Pro Tempore Daniel Scarth.

Moncrief was a driving force in getting Fort Worth residents behind the Horned Frogs during the season.

Jason Lamers, Fort Worth public information officer, said Moncrief declared three “Go Purple” days before the Frogs’ home games against Utah and New Mexico, as well as the day of the Fiesta Bowl. Lamers said Moncrief also had a section of the Trinity River renamed “Horned Frog River” and dyed purple before the game against New Mexico.

Moncrief said at the meeting he intends to continue the “Go Purple” days during next football season.

“Every Friday before home games on Saturday, Fort Worth is going to go purple,” he said.
Despite TCU’s bowl defeat, Moncrief said he expects support for the football team and other Horned Frog teams to increase next year.

“I think our city has provided tremendous support for TCU, but it’s only the beginning,” Moncrief said. “The purple flame is burning brightly, and we need to keep it burning.”

Lamers said that TCU’s participation in the game itself was a victory for the city and for the university.

Adam Park, communications director for the City of Boise, said the city is “thrilled” with the Broncos’ victory.

“TCU is an excellent team and a worthy opponent, and we feel very fortunate to have come away with a win,” Park said.

Bieter, who is recovering from knee surgery, was unavailable for comment.