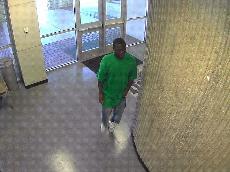 Campus police have not made any arrests in a football locker room robbery, but they have caught two men on video suspected of stealing $4,000 worth of cell phones, iPods, cash and more, a university police official said.

The suspects were caught on camera entering the John Justin Athletic Center through a door that leads to the south end zone before being seen by two witnesses in the football locker room, TCU Police Sgt. Kelly Ham said. The identities of the witnesses were withheld because the investigation is still in progress.

According to the police report, the belongings were taken from the lockers of 12 football players Saturday while the team was on the practice field. The theft was reported at 11:36 am., just after practice ended, the report stated.

“There’s a lot of people coming in and out of there and (the witnesses) knew that the football players were at practice,” Ham said. “(The suspects) could’ve been trainers, they could’ve been anything, but it was enough to catch their eye.”

Detective Vicki Lawson said the police department does not think the suspects are students at the university, but acquaintances of members of the football team, because in the video they showed a familiarity with the facility. The suspects entered the building about 30 seconds apart and left separately, Ham said.

According to the police report, both suspects are black males, one about 6 feet tall, the other 5 foot 8. The police department withheld the video because the investigation is still ongoing.

“There is stuff in the video that I don’t want to release,” Ham said.

The cameras that caught the suspects are part of a new system of cameras that the campus police department is working to install across campus, Ham said. The cameras in the John Justin Athletic Center happened to be the first ones that were turned on, Ham said.

“The system in that area (of campus) was turned on Friday and within 12 hours it was doing its job,” he said. “Now we just need to find out who they are.”

Ham said the athletic complex was not the first building to have the cameras installed because it is a problem area, but because it is a new building and the wiring was put in from the start.

Ham said one of the suspects was seen by a campus security guard walking on Wabash Avenue at about 12:30 p.m. Saturday. The guard did not report it because he had not yet seen the pictures of the suspects, he said.

“The reason it got the security guard’s attention is because the guy was acting suspicious, looking over his shoulder and walking real fast,” Ham said. “He made a note of it and didn’t know it would be in connection with what was going on.”

Director of Football Operations Mike Sinquefield declined comment because it is a police matter, said Mark Cohen director of athletics media relations. Cohen said the doors to the athletic complex were unlocked because practice was almost over and the team was preparing to go back inside.

Ham said when the suspects left the building the cameras did not reveal anything that would cause suspicion.

“When they walked out they looked just like they did walking in,” Ham said.