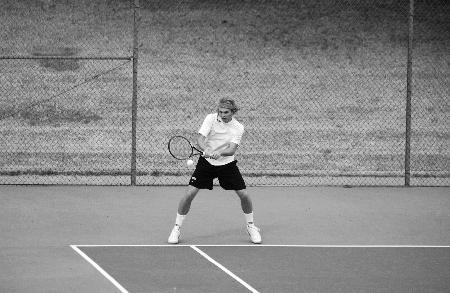 The men’s tennis team entered the season as a group of mostly young and untested players, but this youth has produced results and a common bond that is one of the squad’s biggest strengths.

The team is one of the youngest in the nation, head coach Dave Borelli said, but his confidence in the team is high. The team comprises six freshmen, one junior and one senior.

Instead of letting the team’s youth be an obstacle to overcome, the group is embracing it.

Borelli said he isn’t worried about the lack of seniority.

“I look at it as positive. Everyone is really eager, hungry and excited,” Borelli said. “It’s all new to them and it’s an opportunity for them to stamp their type of attitude, tradition and heritage to their program.”

The team wasn’t very good last year, but this year’s players have the opportunity to make their identity as a team, Borelli said.

“It’s fun to start a new tradition and a winning program,” Borelli said. “They are the pioneers.”

One person on the team who isn’t lacking experience is senior Cosmin Cotet, who is ranked No. 27 in the nation by the Intercollegiate Tennis Association. Instead of feeling added pressure because of the team’s youth, he said he is enjoying it.

“It gives me a lot of confidence,” Cotet said.

Cotet already notched wins over three top-ranked players during last semester’s fall season, including an upset victory over then No. 2-ranked Steven Moneke of Ohio State.

Cotet has also found success with his doubles partner Kriegler Brink, earning a pre-season ranking of No. 43.

Doubles matches are something the team is really trying to focus on this season, Borelli said.

“I think we have the potential to be really good in (doubles) where we can compete with anyone in the country,” Borelli said. “We are capable of winning at one or two or other positions, particularly down at the bottom of the lineup, I think we are going to be stronger.”

The team only won 10 matches of 44 possible matches at the five and six spots last year, but the team did post a winning record at the one through four spots.

“We weren’t experienced enough down at the bottom,” Borelli said. “This year we are more experienced and solid all the way through.”

The team has a lot of good opportunities outside of conference play this semester, and the goal is to win conference as well, Bulls said.

The first tournament of the semester is Feb. 2, against the University of Texas at San Antonio and St. Edward’s University.

“I think we are going to be a lot better than our pre-season ranking,” Borelli said.