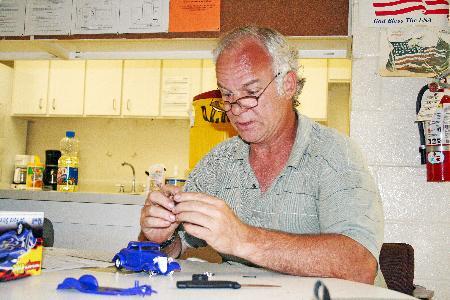 They crowd the sidewalks of Cypress Street in Fort Worth every evening, some shouting profanities back and forth and others sitting quietly as they clutch dirty knapsacks and rolled up sleeping bags.

They are the homeless in Fort Worth.

More than 600 pile into to the Presbyterian Night Shelter each night. Some rent bunk beds downstairs, the sober ones get promoted to the upstairs dorms and the men who have no other options curl up on torn blue mats on the floor and in the hallways.

Among these men are those who once put their lives on the line for their county. They are the U.S. veterans.

“You lose all of your self-respect and self-esteem when you walk through the doors here because you’ve basically come to hell,” said U.S. Army veteran Mike Cole, 63. “We call downstairs ‘the pit,’ and that’s exactly what it is. You’ve got every walk of life down there. They’ll look you in the face and steal from you when you ain’t looking.”

Although U.S. veterans are more likely to be economically secure, white men, about 195,827 of them are homeless on any given night, according to a study released by the Homelessness Research Institute in November 2007.

More than 4,000 people in Tarrant County are homeless, 16.5 percent of whom are veterans, according to a 2007 study by the Tarrant County Homeless Coalition.

Fort Worth is one of the largest cities in the U.S. without a 10-year plan, he said, so in 2004, the city created the committee to study the issue and has been working on the plan for almost two years.

The first draft of the plan estimates a total cost of $700,000 to $3 million a year, Thornton said, but the price tag is not finalized.

Michele Bogue, instructor of sociology at TCU, said the three main factors that contribute to homelessness are health issues, economic issues and lack of affordable housing.

“They tell you that you’re learning all these skills … but when [veterans] try to put that experience on a resume, it doesn’t translate,” she said. “They know they can do the job, but there’s no way for them to communicate that to employers.”

In 1962, Cole became a missile follower, writing backward on a board in order to track missiles and airplanes, he said.

“They said it would be a great career when I got out,” he said. “But nobody has asked me to write backward since.”

But a lack of income isn’t the only obstacle for these veterans.

According to the study by Homelessness Research Institute, one out of 10 veterans is disabled, which is often a result of combat, and 45 percent of homeless veterans are diagnosed with a mental illness, including post-traumatic stress disorder.

Post-traumatic stress disorder is commonly associated with military experiences for veterans who have been in combat zones, exposed to situations that put their lives at risk or observed death day in and day out, said Teresa House-Hatfield, director of the Comprehensive Homeless Center and Domiciliary Care Program for the VA North Texas Health Care System.

But House-Hatfield said not everyone in combat develops PTSD.

“People are hurting and suffering with the emotions of those experiences,” she said. “They try to numb themselves to get away from those feelings, hide those feelings, and it’s often a form of self-treatment that doesn’t actually solve any of the problems. It adds additional problems once they become addicted to the alcohol and other drugs.”

About 70 percent of homeless veterans suffer from substance abuse issues, according to the study by the Homelessness Research Institute.

Cole’s addiction to alcohol began at 18 when he joined the Army, he said.

In January of 2006, Cole started binge drinking in Dallas and woke up at John Peter Smith Hospital in Fort Worth, he said. His addiction stole the use of his legs and he had to learn to walk again, he said.

House-Hatfield said more than likely the homeless veterans have the illness or limitation first, which results in their homelessness because they can’t maintain employment or keep a steady income to pay for housing. But, she said, once they become homeless, it is harder for them to maintain a normal lifestyle and get medical care because they don’t have transportation. It becomes a vicious cycle, she said.

Carl Young, 49, a U.S. Navy veteran, said he became homeless in 2004 after he became addicted to crack cocaine. He said he also suffers from arthritis and diabetes.

Young stays at the Presbyterian Night Shelter in “the pit” but he doesn’t mind.

“It might get a little loud and noisy down there, but they’re just people down on their luck,” he said.

Although Young has family – a son – he tries to stay away, he said.

“If something bad happened, I’d go home,” he said, “but I stay away otherwise. I know if I go over there what’s going to happen. I’ll smoke some dope. My son sells dope. That’s how he makes his living.”

The Presbyterian Night Shelter’s Vet-to-Vet Program is a peer-to-peer support group that was ranked No. 1 in the nation of all VA programs last year, said Mark Bray, a Vet-to-Vet facilitator.

Bray, who was homeless for four years, said the beds are free for veterans. And once they are “clean,” meaning free from drugs and alcohol, they could be moved to the dormitory, like Cole, he said.

The shelter also gives homeless veterans the option to attend regular Alcoholics Anonymous and Narcotics Anonymous meetings and do piece work to save up enough money to participate in a subsidized housing program, Bray said.

The Presbyterian Night Shelter is working on a new addition – Patriot House – that will house 32 veterans who are currently living in the dorms, Bray said.

Other shelters such as the Union Gospel Mission of Fort Worth and The Salvation Army offer housing for veterans, as well.

And The Salvation Army also has a two-year transitional housing program, which is currently aiding 47 veterans, Clemons said.

Although the VA meets the needs of about 20 to 25 percent of the homeless population, it’s leaving the other 75 to 80 percent without resources because the number of veterans returning home is growing exponentially, Bogue said.

“We naturally assume that if you get hurt in the military, the VA is going to take care of you,” she said. “Not that the VA is a bad place, but they’re at their max. They’re tapped out of resources.”

David Mackie, nurse practitioner with the Dallas VA, said part of the problem is with the hospitals.

Bogue said one of the biggest problems is that people are afraid to talk to the homeless.

“We often want to lock the doors and look the other way,” she said. “We treat them as non-persons. If we don’t look at them, they don’t exist. But that’s not true. They’re living, breathing, creative human beings.”