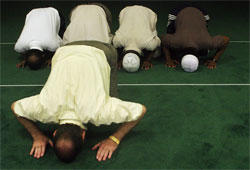 A new mosque opened less than four miles from campus Friday, with members at the door all day eager to welcome in those in the community interested in learning about the new facilities and the Muslim religion.”I am so happy for the new mosque,” said Saddyna Belmashkan, a freshman international communications major and mosque member. “Now we can accommodate more people.”

The 35,000 square-foot, two-story Masjid Al-Ibrahimi mosque opened at 4901 Diaz Ave., only a few blocks from the older and smaller facility on Fletcher Street.

Belmashkan said she has been attending the mosque for about four years.

“The new facility will allow the community to come together for events,” she said.

She said the project has been ongoing for nine years and is nearly complete.

During tours of the mosque given Friday and Saturday, members displayed two prayer rooms, pious rooms for sharing the Muslim faith, washing rooms for cleansing before prayer, social rooms, special rooms for speakers and administrative offices.

Belmashkan said it was nice to have a new facility for Muslims to congregate because of how rare it is to see Muslims in Fort Worth in comparison to surrounding areas such as Arlington, Dallas or Garland.

Belmashkan said she was raised in Fort Worth in a religiously mixed family – her mother, Baptist, and father, Muslim.

Although Belmashkan was primarily raised in the Islamic faith, she said she often celebrated many of the Christian holidays with her relatives on her mother’s side of the family.

She started wearing her scarf, called a hijab, her freshman year of high school and both of her parents have always respected her for it, Belmashkan said.

“I love wearing my scarf,” she said. “This is my faith. My scarf is my way to show the world: This is what I believe.”

Belmashkan said she knew she was different compared to the norm, especially at TCU, a predominately white and Christian university, but said she has always had people respect her along the way.

Senior Muhammad Malik, an accounting and finance major, said he has noticed the same respect and friendly atmosphere on the TCU campus.

Malik was born in Pakistan and moved to Texas four years ago to study. He said he has been at TCU for the past three semesters and has only had good experiences fitting in with the students.

Malik attended the University of Texas at Arlington and North Lake College in Irving before settling down at TCU.

“TCU has been the best college I’ve been to,” he said, referring to the interactions he has had with students.

Meghan Mach, a junior political science major, said she is in a class called “Islam in America,” taught by Dr. Yushau Sodiq.

She said the class has taught her the true side of Islam, confronting many of her previous notions about the religion.

“I think it is always important to take the initiative to learn about something that you fear or hate,” Mach said. “What I have begun to realize is that Islam is not a hostile or volatile religion at all, but instead is just as peaceful and tolerant as Christianity, Judaism and other religions.”

Belmashkan chooses to proudly carry herself in her hijab around the TCU campus.

“I stand out in the best way,” she said with a smile.