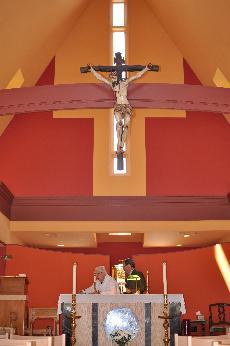 The College of Saint Thomas More, located at 3020 Lubbock Ave. on the edge of the university, has always focused on what happens inside their buildings instead of the outer aesthetics of its campus, but now a new chapel is starting to change that.

“What we did was concentrate on the curriculum,” said Dr. James Patrick, chancellor of St. Thomas More. “There’s so many places with beautiful buildings but there’s not much inside. My thought was that we’d do the inside first and then try and then move to the outside.”

St. Thomas More, a Catholic institution with 45 full-time students, completed construction on a $500,000 chapel at the intersection of Lubbock Avenue and West Bowie Street and began operating May 20.

“We are all really happy about it,” said Thomas Beyer, a junior at St. Thomas More. “We’ve always been a close-knit community being so small in an urban environment. The chapel has been another one of those things that helps us rally around the college.”

The building, which is primarily utilized for daily mass, was constructed in the same location of St. Thomas More’s original chapel, which was a two-car garage converted into a chapel, Patrick said.

“The old building was small and not very beautiful,” Patrick said. “It wasn’t worthy of the Almighty God.”

The college, which was founded in 1981, moved to its current location in 1985 where its 50-foot lot expanded until it covered two acres, Patrick said. St. Thomas More’s continued expansion has been funded almost entirely by charities and personal donations, he said.

“It’s amazing we do as well as we do because parents like to leave their children off at places that have a lot of style, and we lack a little in style,” Patrick said. “The buildings vary. Some are banal and mediocre while some are truly terrible.”

Although the college is a fraction of the size of its neighbor next door, Patrick said the school will follow TCU’s growth and renewal plans by planning construction of a new library in the next 18 months.

Patrick, however, said there is a realistic chance the library will not be completed on schedule. The new chapel was scheduled to be completed sometime around last Christmas, he said.

Patrick said that St. Thomas More’s long-term plan is to complete a quadrangle that will be formed by the new library along with residence buildings. A new dining hall will also be constructed in the next 2 years, he said.

“I would like for (St. Thomas More) to continue to be a center in which the liturgy is celebrated with beauty and reverence,” Patrick said.