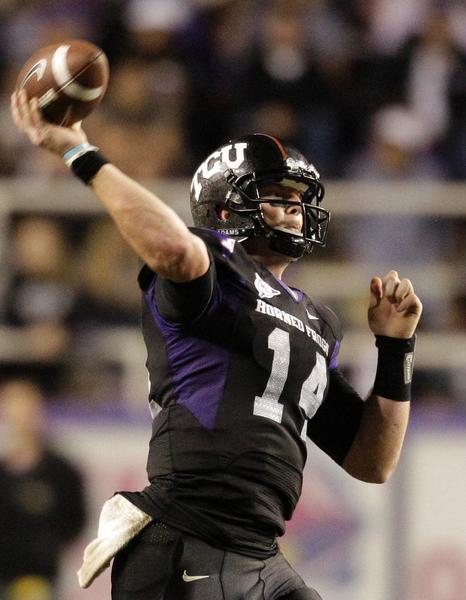 In a match-up attended by ESPN College GameDay, No. 3 TCU travels to Salt Lake City to take on the No. 5 Utah Utes. The meeting will be the first time in the Mountain West Conference’s 11-year history where two top-five teams face off in conference play.

Both teams are ranked in the top five in the BCS standings. One team will continue its path toward a shot at a BCS berth and perhaps the national championship. The other will be out of the lead for even a MWC Championship.

TCU has never won against Utah on the road, including a heartbreaking 13-10 loss two years ago that helped send the Utes to the Sugar Bowl. Last year, the Frogs crushed the Utes 55-28 in front of a record crowd at Amon G. Carter Stadium in Fort Worth.

This game has had huge implications in recent years. The last two seasons, the winner of this contest won the MWC championship and went on to play in a BCS game.

This year, both teams rank in the Top 10 nationally in points scored and points allowed.

TCU’s defense is giving up fewer than nine points per game this season, first in the nation. The Frogs have given up only 16 total points in five MWC games so far but may have their hands full against a Utah offense putting up more than 45 points per game.

The Frogs are coming off a 48-6 victory at UNLV. The TCU offense had 530 yards of total offense, while the defense held UNLV to 197.

In just their second game outside of the Dallas-Fort Worth area, the Frogs played in front of a crowd of fewer than 17,000 at UNLV. This weekend’s match-up will be in front of a sold-out Rice-Eccles Stadium. Utah has encouraged fans to “blackout” for the game like they did in 2008. TCU head coach Gary Patterson said he was impressed with Utah’s fan base, especially the student section.

Utah will also wear special camouflage black uniforms in honor of the Wounded Warrior Project, according to Utah’s athletic website.

If the game didn’t mean enough already, it will be Utah’s last game against the Frogs as a member of the MWC. Next season, the Utes will leave for the Pac-10 conference, which will be renamed the Pac-12.