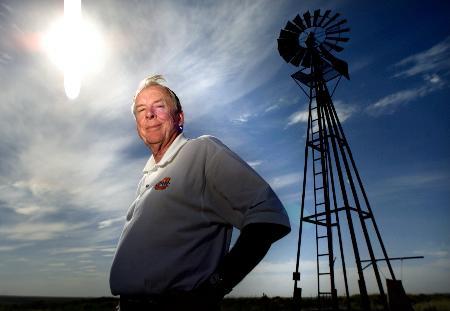 The creator of a plan to ease the country dependence of foreign oil will speak to the Energy Club as a way to boost the club’s membership numbers and give students and the community a better grasp on the current energy crisis.

T. Boone Pickens, chairman of the hedge fund BP Capital Management, is not only one of the richest men in the U.S., but author of the new book “The First Billion is the Hardest: Reflections on a Life of Comebacks and America’s Energy Future.”

The town hall-style meeting, where Pickens will discuss “The Pickens Plan – Ending Our Dependence on Foreign Oil,” will be held next Monday at 4:30 p.m. in the Brown-Lupton Univesity Union Ballroom.

According to the Pickens Plan Web site, the plan objectives are to decrease America’s need for foreign fossil fuel by using wind power to generate up to 22 percent of the country’s electricity, and providing incentives for home and commercial building owners to upgrade their energy saving options.


Justin LaPoten, a sophomore finance major, said
he and Ben Voigt, a sophomore business major, created the Energy Club last spring in order to inform the student body about the energy, oil and gas industry. LaPoten said being given the opportunity to have such a prominent businessman speak is a great accomplishment for the club that started only a year ago.

Voigt said his initial interest in Pickens started from his influence on the business world and what he has accomplished through his career in the field of energy. Pickens’ ideas behind the way the country should address our national energy policy were what sparked Voigt’s interest next, he said.

The week before Thanksgiving Break, Voigt said he decided to take a chance and send a hand-written letter to Pickens. The letter spoke of his respect toward what Pickens had done in the business world and described his thoughts as to why Fort Worth would be a great platform for him to campaign his Pickens Plan, he said.

After almost two weeks of anticipation, Voigt said he heard back from Geoff Bailey, a representative of the Pickens Plan.

Greg Hamre, a junior finance major and member of the Energy Club, said he is looking forward to hearing Pickens speak.

“The Energy Club will most definitely gain a fresh perspective on where they are and where they want to be after hearing from Pickens,” Hamre said.

Voigt said the event is expected to have an attendance of about 1,000 visitors from around the area.

According to the university Web site, the first 200 students to arrive with their ID will receive a signed copy of Pickens’ new book.