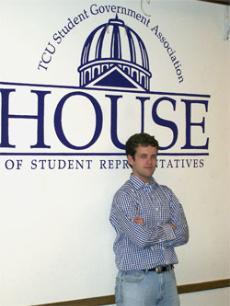 On Tuesdays at 5 p.m. many students can be found wandering The Main or the University Recreation Center, but each week one freshmen sits, with gavel in hand, preparing to lead the Student House of Representatives meeting. Thomas Pressley, speaker of the House in the Student Government Association, said that after serving his first semester as a representative for the AddRan College of Humanities and Social Sciences, he was looking to get more involved in SGA in the future- – but not necessarily right away.

However, he said, when the position of speaker of the House opened in January after John Campbell resigned for personal reasons, he decided to apply.

“It was nice to see that doors do open, and I can get more involved,” said Pressley, a freshman political science major.

Though Thompson said in the future this position will likely be held by an upperclassman, Pressley has proven himself a qualified leader, and his classification with the university has not been an issue.

“He’ll step up when it’s needed and knows how to be an effective leader by earning respect, not demanding it,” Thompson said.

As speaker of the house, Pressley is responsible for running and creating agendas for the House and House Executive meetings, for sending House e-mails, ensuring that bills are relevant to the student body and meeting with the SGA adviser each week to discuss long-term goals and issues that have come up in the House.

These responsibilities previously fell under the vice president, something Pressley said last semester appeared to be a tremendous workload.

“I can’t imagine having this position and Jace’s and being able to carry an academic load,” Pressley said, adding that he and Thompson usually work more than 10 hours in the SGA office each week.

As a president for the Youth and Government Senate in Louisiana during high school, Pressley said, he felt he was capable of handling the position.

The Youth and Government Senate is a weekend conference where students write and debate bills relevant to current issues, he said.

Pressley said he was in charge of setting the docket and managing the debates, an experience he said taught him parliamentary procedure and helped him to realize he was capable of leading other students.

Jason Ratigan, academic affairs chairman, said he was initially nervous when he heard a freshman would be filling the speaker of the House position because the situation had potential to create problems among other representatives in the House because of Pressley’s age.

However, Ratigan said, Pressley’s restrained leadership style is appropriate for the House and has caused the situation to turn out well.

“He’s got a good idea of what the House is doing and how to direct it,” he said.

Ratigan said the addition of this position has helped to separate the House and Programming Council, allowing the House to better focus on accomplishing its goals.

Pressley said he plans to remain involved in SGA throughout his college career, and he said he would like to work on increasing student involvement.

He said one of the reasons he came to TCU was because of the friendliness of the campus, and he loves to see students get involved in SGA events and other organizations.

“Our students care about what’s going on and that’s nice to see,” he said.

However, Pressley said, he would like to create more competitive elections in the future because this would show that students understand the importance and commitment that goes into each SGA position.

He said he understands that students do not want to sit in a meeting for two hours every Tuesday and that he is trying to run the House meetings more efficiently this semester.

Although the meetings and participating in SGA are a time commitment, Pressley said, seeing SGA activities help students makes it all worthwhile.