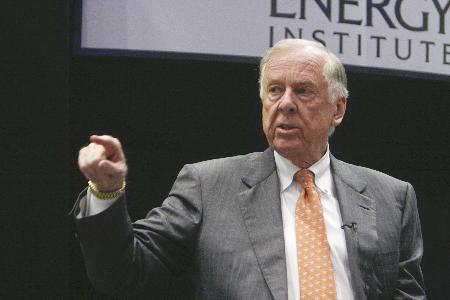 A billionaire energy tycoon told about 800 people Monday afternoon in the Brown-Lupton University Union Ballroom that if the country does not begin using its own resources, the current crisis will only get worse.

T. Boone Pickens, chairman of hedge fund BP Capital Management and author of “The First Billion is the Hardest,” said that in two years the United States could be paying $200 to $300 a barrel for foreign oil if it doesn’t cut foreign oil dependency.

Pickens said moving away from foreign energy sources is key to restoring the United States’ prominence.

“The world sees us using the enemy’s oil, and other countries have lost respect that we haven’t moved past this and solved our problem,” Pickens said. “If we could move away from foreign oil I believe our credibility would turn.”

In the town hall-style meeting, Pickens said the United States could decrease its need for foreign fossil fuel by using wind power to generate up to 22 percent of the country’s electricity. He said the wind power would provide incentives for home and commercial building owners to upgrade their energy saving options.

Virtual March on Washington
What: An opportunity for supporters of the Pickens Plan to focus their attention on impacting the White House and Congress. The New Energy Army will e-mail, call and fax every member of Congress in order to encourage support for the Pickens Plan. When: April 1-3 For more information, visit www.pickensplan.com.

Pickens said he hopes that the country could use power from wind for transportation fuel within the next 20 years.

The importance of finding alternative means of energy is crucial because the U.S. uses such a large portion of the world’s oil.

“We are operating like we have oil,” Pickens said. “Our country only has 3 percent of the world’s oil reserve, yet we are using 25 percent of the oil produced worldwide everyday and we import 68.7 percent of our oil.”

Holt Redwine, a sophomore finance and accounting major, said Pickens’ idea that the younger generations need to take on the responsibility is what students needed to hear.

“He’s putting the pressure on our generation, which is what we need to motivate others to step up and make a change,” Redwine said. “His plan may not be the complete answer, but it’s a step in the right direction.”

Justin LaPoten, sophomore finance major and co-founder of the Energy Club, said the Pickens Plan seems to be the best way for the U.S. to cut off its need for foreign oil.

“I think when you see the recession we’re in right now, the fact that we are importing 70 percent of oil from places like Iran and Saudi Arabia that aren’t very friendly with us doesn’t seem like something we should be doing,” LaPoten said. “The Pickens Plan gives us ways we can get away from that.”