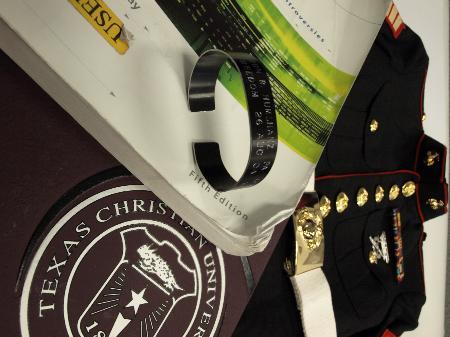 Exchanging their troop fatigues for plainclothes and trying to fit in with other TCU students, military veterans adjust to a new life where lessons are learned in the classroom and not on the battlefield. Suzanne Weldon, who handles Veterans Affairs issues and academic eligibility in the Registrar’s Office, said there are 72 veterans on campus, 16 of which are listed as disabled.

Junior advertising/public relations major Heidi Lee transferred out of the Army into civilian life after a knee injury. Coming back to college was different for her because she was out of the service six years before deciding to get her degree. Set to graduate next December, Lee is listed with the U.S. Department of Veterans Affairs under Chapter 31 in the Vocational Rehabilitation Program where the service will pay for a person’s college tuition and fees, books and school supplies.

The question of identity is one of the difficulties Lee said veterans like her face when coming out of the service onto college campuses.

“I think the major adjustment that most soldiers coming back have is the loss of camaraderie that they have instantly with the platoon or group they were in,” Lee said. “I know that some of the people I saw that came out just felt like they were kind of floating around with nothing to hang onto because they didn’t have those shared experiences.”

Whether it’s the haircut or the way they walk, Lee said she can point out a veteran in plainclothes from a mile away. She has kept in touch with her fellow TCU veterans, even helping them network and make friends via a Facebook group called “The Vets of TCU.”

With more media focus on suicide rates in the Army, which have been rising for four consecutive years, and soldiers returning home with post-traumatic stress disorder, Lee said the extending deployment dates and multiple tours of duty can add even more stress on top of all the explosions and gunfire that combat brings.

“I think they’re sending these kids over for multiple tours so they know what they’re going back into,” Lee said. “You don’t have someone telling you what to do, where to be and what to wear. But to go back and forth like that, particularly if you already suffer from post-traumatic stress, that has to have an effect.”

Coping with the effects of war

Constant ringing in the ear stemming from tinnitus received after working with explosives. A scar above his lip where he was hit with a rifle.

These are some of the damaging effects that you can see on Iraq War veteran and junior advertising/public relations major Chris Simcho’s body. Through two tours of duty in the Iraq War he picked up a few injuries along the way, but Simcho said he’s fortunate when it comes to the rising number of veterans making the transition to civilian life with scars on the inside.

Simcho, a disabled veteran, said that he doesn’t suffer from PTSD but when he came home he experienced some of the symptoms associated with it. He would get anxious when he was in crowds, always look for the exits in buildings and use other tactics that were standard operating procedure in Iraq.

This phenomenon where a person will continue to scan his or her environment for threats is called hypervigilance, and it’s listed in the American Psychiatric Association’s fourth edition of its Diagnostic and Statistical Manual of Mental Disorders (DSM-IV-TR) as a symptom of PTSD.

These symptoms eventually stopped with time, he said. Simcho said some of the factors contributing to PTSD include the effect that distance has on a soldier if he has a family at home. For him, he said, it’s not so much the explosions and gunshots that rattle the soldier’s mind as much as the constant push and pull of deployment dates.

“People will find out that their wife or girlfriend has been cheating on them or doesn’t want to be with them anymore and they can’t deal with distance,” Simcho said. “There’s a lot of territory that comes with being in the military, especially overseas. That’s hard on people because being away from family you might have a kid, although I hope that’s a reason to not kill yourself.”

The Sept. 11 attacks in 2001 was the catalyst that caused Simcho to enlist in the Marines Corps. He was attending Heald College’s School of Business in his native state of California at the time he felt the call of duty to serve his country.

He dropped out of school the next week and signed up to join the Marines. Five months later, he was in boot camp and a little over a year later, he saw the beginning of the Iraq War with the 1st battalion of the 1st Marines weapons company in March 2003.

The transition from the battlefield to college campus has gone smoothly, Simcho said. He said the smaller class sizes at TCU made for an atmosphere that didn’t overwhelm him like a larger public university would. At 26 years old, Simcho said adjusting to the college atmosphere is harder if one is older than the average age of an undergraduate student.

Simcho said he tends to stick with other veterans because they are closer to him in terms of age and experiences.

“I think meeting veterans is easier to do, and that’s one of the bigger adjustments being a veteran in college is that you find yourself older than the usual crowd,” Simcho said. “For me to go out and attend a party to get to know people would feel pretty awkward.”

Christopher Gillett, a senior psychosocial kinesiology major and veteran of the Air Force, said it was never a question of if he would go back to school, it was only a matter of when he was going to get his college education.

Gillett stayed in the service while his wife got out of the Air Force to go to college in North Carolina. Gillett left on a medical discharge with a back injury and waited a few years until his wife graduated before going back to college, first at Tarrant County College and then at TCU.

“If I wasn’t in the Chapter 31 vocational rehab, there would be no way I could afford TCU,” Gillett said.

Gillett said he has a few friends who are veterans but said that he doesn’t stay within one group when it comes to fitting in.

“If we just hung out with each other, we’d really limit ourselves,” Gillett said. “I don’t have a problem meeting other friends. I have a lot of friends who are 20 years old. It keeps me young too.”