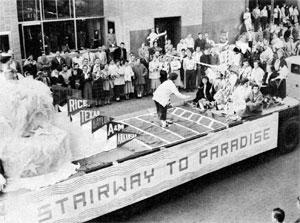 First came poodle skirts and sock-hops. Now it’s tailgates and skydiving, and all are part of TCU’s Homecoming evolution, 50 years in the making.Regardless of the era, alumni and students say Homecoming, a long-standing tradition at TCU, brings the community together.

Jones said that although nearly 50 years have passed since she attended TCU, many of the traditions still carry on.

Jones said that, like today, Homecoming when she was a student was filled with week-long events that revolved around the football game at the end of the week.

“It was a big event back then, and everybody went to the football game,” Jones said. “We had a pep rally before the game, a big bonfire and each of the classes made a float for the big parade.”

Although the pep rally and parade are still key traditions, Jones said, she recalls some differences.

“Back then we had the parades downtown Fort Worth,” Jones said. “The whole community was a part of the event.”

Jones said the Homecoming queen was presented on the field at the football game.

“We only had a Homecoming queen and her court, but no king,” Jones said. “We also had a Mr. and Ms. TCU, but they were separate from the Homecoming court.”

Looking back 50 years, the 1955 TCU yearbook describes that year’s Homecoming as “the biggest, gaudiest Homecoming in history.”

Although Homecoming was a major event 50 years ago, Jones said, the participation has not always been that way.

“There was a period when the crowds were dismal, but I think now it’s getting back up again,” Jones said.

Perry Marchbanks, a Spanish instructor and 1994 graduate from TCU, said that when she attended TCU, the participation did not seem as big as it is today and said she thinks the performance of the football team plays a large role.

This year’s team is preparing to defeat Army at the Homecoming game.

This year’s Homecoming committee has put a lot of effort into planning the festivities, said director of Homecoming Meghana Mathew.

“This year, the Homecoming committee decided to organize extra events in addition to the traditional ones, so that Homecoming week is really a week of exciting events for TCU,” Mathew said.

Mathew said Homecoming is a week of unifying the TCU family.

“Homecoming is an annual event where TCU’s alumni return to campus for the home football game,” Mathew said. “It is a chance for them to reminisce about their time at TCU, and also to come back and see how the university has grown.”

Amy Thomas, a freshman business major, said it is important for students to get involved in their school community.

“Homecoming is a great opportunity to show our school spirit and team pride,” Thomas said.

“The best part of the weekend is tailgating before the game and watching the fun unfold as the game begins,” O’Fallon said.

The game ball will be dropped onto home field as a skydiver lands during the opening presentation, Jones said.

Jones is famous for initiating the TCU Fight Song at every pep rally.

“I started cheering at the Pep Rally with some of the alumni when they started up Frog Camp about 11 or 12 years ago,” Jones said.

She said she is still a part of Homecoming because of the fond memories she had when she was an undergraduate.

“It is interesting to see the differences of Homecoming today versus when I was attending TCU,” Jones said. “It was a fun time, and I am glad I still get to keep the memories alive.