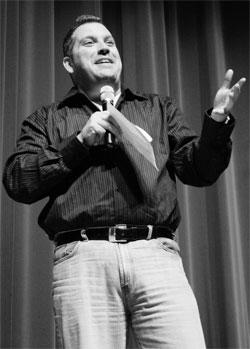 The co-founder of CAMPUSPEAK, an agency that hosts a circuit of college speakers, said to about 60 fraternity and sorority members that students must speak out when problems arise.”If you see someone hazing or doing things that are approaching hazing in your chapter, somebody’s got to be the leader and step up and say, ‘This is wrong,'” said T.J. Sullivan, co-founder of the agency.

Sullivan said many times, students do not take time to address sensitive issues at hand because they assume others will make the call.

“When there are other people around, the responsibility to do something is diffused,” he said.

Panhellenic adviser Stephanie Williams said she has heard Sullivan speak before and likes the way he presents a topic.

“T.J. can get everybody invested in what the subject matter is without it being too lecture style,” she said. “We want students to be educated but entertained, so this is a great compromise for them to think about hazing in a different light.”

Narcely Ruiz, vice president of Chi Upsilon Sigma, said although her sorority has not faced these issues, she enjoyed Sullivan’s message.

“He gave us some insight on how to confront some situations … if we do have to face those problems,” she said.

Will Sager, Interfraternity Council president, said he thought Sullivan was able to inject humor into a sensitive subject.

“There’s just as much hazing in sororities as there is in fraternities, and I think (Sullivan) did a good job of breaking down the facts,” he said.