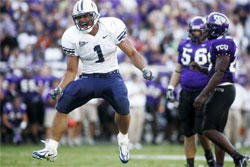 Lack of focus, maturity and physicality led to the Horned Frogs 31-17 loss to the BYU Cougars Thursday night.”You have to give BYU all the credit,” head coach Gary Patterson said. “For some reason, in this program, we don’t seem to be able to handle success. This ballgame here was the most important ballgame on our schedule up to this point. I don’t think you can take anything away from coach Mendenhall. They worked on a short week and they came here and got after us. You got to give BYU a little bit of credit. I thought they did a great job. They were more physical than us tonight and that doesn’t happen very many time in Amon Carter Stadium.”

Two weeks ago, the Frogs defeated the Texas Tech Red Raiders 12-3 holding the nation’s then-No. 19 scoring offense to just a field goal, which Patterson partially attributed to the lack of experience of his freshman cornerbacks and allowing third-down conversions.

I think five or six times we had them third and long and we let them out in the second half,” Patterson said. “We played probably the best game we could’ve played two weeks ago to win a ballgame. But, to be honest with you, our freshman corners caught up with us tonight.”

Although the Frogs gained 44 more yards of total offense than the Cougars, their inability to score necessary points in the red zone also contributed to their loss.

“It’s the same thing as SMU last year,” Patterson said. ” Five times we’re in the red zone and you don’t score any touchdowns, you’re not going to win any ballgames. We’ve been doing this all year. We’ve got to stop killing ourselves inside the red zone. When you get down there against good football teams, you got to put touchdowns on the board, not just field goals.”

Junior free safety David Roach said that the team lacked the focus necessary to stop the Cougars on their third-down conversions.

“It was just focus,” Roach said. “Everybody wasn’t focusing in and doing the things they needed to do. It all comes down to little things. You know, if you get little things accomplished, then the big goal is never completed. We didn’t play like we should have played.”

Senior quarterback Jeff Ballard who threw for 296 yards and rushed for 63 yards, said that the loss was a disappointment but the team needs to look forward to the next week.

“We need to take it as one game and not let this ruin our season and continue to have a great season like we did last year ,” Ballard said. “The one goal that we want to reach right now is the conference championship and, with one loss right now in the conference, we still can. Right now we just have to take it one game at a time and try to win the rest of them”

With the loss, the Horned Frogs nation-leading winning streak ends at 13 games, junior place kicker Chris Manfredini’s perfect field goal streak at TCU ends at 18 straight and senior quarterback Jeff Ballard’s undefeated streak, which is third all-time at TCU, ends at 11 games, but Patterson said he and his team needs to put the loss behind them and prepare for the Utah Utes.

“We’ve got an even a tougher game this next week going into Salt Lake City and into someone’s else backyard and try to win,” Patterson said. “If we play like that, we’re not going to.