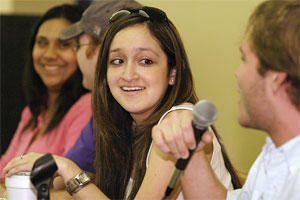 A panel of four students answered questions related to dating, sex, relationships and more in The Main on Thursday during the “She Says, He Says” event. The panel, comprised of two male and two female students, interacted candidly with the audience for an hour.

Lissett Contreras, a freshman business major, said she liked how one of the male panelists said men act strong and emotionless because that’s a part of the American culture, and that’s how men are raised.

“I had been studying about some of these issues in women’s studies class, and it is interesting to see these people talk about it,” Contreras said.

She also said, however, that she didn’t agree with a female panelist who said girls are emotional because they are insecure.

The male panelists’ views contradicted the views of their female counterparts and vice versa.

Morgan said the physical appearance of the opposite sex is what first grabs the attention, while everything else happens later. He said he considered that to be love at first sight.

When asked about one pet peeve the panelists had about the opposite sex, Kearns said sometimes women want to talk when men prefer to be left alone.

“I like talking and I like listening, but there are times when I just want to watch TV,” Kearns said.

Velasquez, on the other hand, said her biggest irritation is men who don’t pay enough attention to their hygiene.

When asked about her idea of a good date, Velasquez said it was “not sappy or romantic.”

Tremillo said her idea of a good date is going out with someone who does not pressure her or make her feel as if she must act a certain way.

The male panelists also reached a common ground, as they said they preferred women who are healthy.

“I’m not about the whole runway model look,” Kearns said.

But Morgan smiled to the crowd and made the audience laugh as he said, “However, if I see a runway model that’s healthy, I’m down for it.”

Morgan and Kearns said a few of the questions were overgeneralized.

“People think all girls want to be bleach-blonde party Barbie, and all guys want to be G. I. Joe,” Morgan said. “Then the question about why guys are always hard and emotionless was stereotypical.”

Kearns said, “Some questions seemed bitter, but overall it was good.