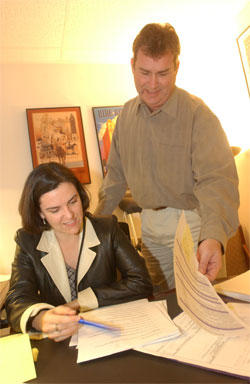 His cramped office in University Career Services doesn’t have a window.Papers, cards, an umbrella, a mug and compact discs lie scattered over his dark wood desk, and his computer screen is propped on several books to bring it up to eye level for his 6-foot-4-inch stature.

His office may be cramped and cluttered, but Chuck Dunning, associate director of University Career Services, said he has his ideal job, and it took him lots of searching to find it.

He is a career counselor who had trouble finding a career, and even though it took many jobs to count to figure out what he does, Dunning said he is ready to use his experiences and stories to help TCU students.

Growing up with a love of the outdoors, Dunning said, he originally wanted to major in wildlife and fishery sciences.

But as it came time to figure out what to do with his life, Dunning’s search for a career wasn’t as easy as going to a college counselor to figure things out.

“I didn’t get any career counseling, and I dropped out after my first year in college because I didn’t want to do what I thought I wanted to do,” Dunning said. “I didn’t have any idea what I was going to do if I wasn’t going to do that.”

Dunning said he went to trade school to be a gunsmith, worked in a sporting goods store, worked in a pet store, went to electrical school and eventually received career counseling after a back injury ended his career as an electrician.

“I was really beginning to think of myself as a loser at that time,” Dunning said. “All these things that I thought should work out were beginning to crumble and fall apart.”

Dunning said he went to the Texas Rehabilitation Commission to find a new job, and that he underwent a lot of career counseling.

“I was the youngest of three children,” Dunning said. “Both of my sisters were significantly older than me, and so I had a lot of opportunities to observe these intense relationships between them and between them and my parents.”

He said he thinks observing his family when he was young is where his fascination with the mind and its ideas began, which eventually led him to pursue a career in psychology.

He said he had a great time when he went back to college and made a 4.0 GPA in his first semester.

Dunning has a bachelor’s degree in psychology and a master’s degree in education from the University of North Texas. He is also a licensed professional counselor.

“Because I’m the kind of person who is interested in ideas and people and why people think and do what they do, I was paying attention to what was going on inside of me through all of the struggles on my own path of self-discovery,” Dunning said.

“Having paid close attention to all of that, I am then able to really relate more to people who are struggling.”

The common theme Dunning found in his search for a job that would make him happy, he said, was a need for intellectual stimulation.

“Ultimately what I discovered that is meaningful to me is that the mind is the most real thing there is,” Dunning said.

Having always been intrigued with the study of ideas, studying psychology was a way to stimulate his mind and study it at the same time.

“Human beings are not computer programs; they’re not something that we can ever completely figure out and map out,” Dunning said.

His study of the mind and its workings has led Dunning to study many subjects, one being phenomenology – the idea that reality consists of objects and events as they are consciously perceived, not of anything independent of human consciousness.

“We don’t know any of this stuff out here without the mind,” Dunning said as he knocked on his desk and shuffled the papers lying around him to illustrate one of the theories of phenomenology.

He said he has also found poetry to be an outlet that is intellectually stimulating and has had some of his poetry published.