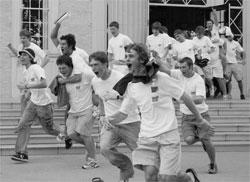 TCU’s Interfraternity Council is jumping into a new school year with more than 300 new members, a slight increase from last fall, IFC’s adviser said.Fraternities wrapped up recruitment Wednesday with 308 pledges on Bid Day and welcomed their new pledge classes in front of Sadler Hall.

Although 324 men were offered bids, only 308 signed their bid cards, IFC adviser Jonathan Elder said. However, more men are expected to accept their invitations, he added.

On Bid Day, each potential member receives an envelope with multiple bids and chooses the fraternity he wishes to join by signing that fraternity’s bid card, Elder said.

IFC President Will Sager said IFC’s numbers are up this year, meaning more men went through the recruitment process.

While the number of students involved in fraternity recruitment is growing, the recruitment process itself is shrinking. These new members completed recruitment in three rounds instead of four, said Sager, senior finance and accounting major.

In the past, each fraternity chapter spent two rounds off campus, which was deemed unnecessary, Sager said. The recruitment process was too long, he added.

Still, even with a shorter recruitment process, some students did not stay until Bid Day, Elder said.

About 56 men did not complete the recruitment process this year, he said.

“Last year, we had about 350 men go through, and I believe about 315 to 320 got bids,” Elder said. “About 30 people either didn’t receive a bid or withdrew themselves from the process.”

Elder said some men do not find places where they feel comfortable. Others might be concerned about the financial commitment, such as annual dues, or they simply lack the time to take part in Greek life, he said.

Elder said the initiations have no bearing on the loss of potential members because initiations are ceremonies that do not include hazing. Alex St. Amour, IFC vice president of recruitment, said he agrees.

“Every chapter has its own separate initiation,” said St. Amour, a junior marketing and management major. “There’s no hazing component to initiation.”

TCU supports the no-hazing policy, which is state law and is included in the student code of conduct, said James Parker, assistant dean of Campus Life.

Initiation is a serious process, which includes activities such as learning about the fraternity, its history or famous alumni, St. Amour said.

“It’s an honor to go through the process; it’s when you become a member of that fraternity,” he said.

Even if incoming freshmen heard about problems that may or may not have occurred, it has not affected IFC’s numbers, which have been climbing the last three years, Elder said.

Sager said the IFC has had problems with recruitment infractions in the past, such as fraternities “badmouthing other fraternities,” but no major issues arose during the recruitment process this year.

“As of right now, no recruitment infractions have been filed,” he said.