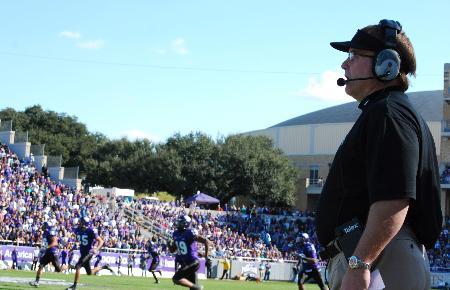 Any speculation about the university’s head football coach Gary Patterson resigning and taking a job at another university could be proved incorrect this morning.

Patterson and the university have agreed to a contract extension and an official announcement is expected Wednesday at 10 a.m., according to the Fort Worth Star-Telegram Web site.

According to the Sports Illustrated Web site, Patterson’s contract could be extended by at least 2 years and include raises for his assistant coaches.

The base salary under Patterson’s current contract, which was extended last year to 2014, is $1.7 million per year, according to Star-Telegram.

Patterson is in his ninth season as the university’s head coach and his 12th season overall at TCU, according to Star-Telegram. He has a record of 85-27.

According to the ESPN Web site, Patterson has been mentioned among possible candidates to replace Charlie Weis as Notre Dame’s head coach, but university officials said Patterson was never contacted.

According to the university’s Athletic Media Relations, Patterson is among two other finalists to receive the George Munger Award, given by the Maxwell Football Club to the national coach of the year.

Patterson was hired as defensive coordinator for the university’s then-head coach, Dennis Franchione, after the 1997 season. In 2000, the university was ranked No. 1 in total defense in the country.

Franchione left for the University of Alabama after the 2000 season, and the university hired Patterson to take over as head coach, according to Athletic Media Relations.

With Patterson as the head coach, the university was ranked No. 1 in the country in total defense again in 2002 and 2008, according to the Athletic Media Relations.

Patterson has led the university to four straight bowl victories for the first time in school history, including the win over Boise State last season in the Poinsettia Bowl, according to Athletic Media Relations. TCU is one of seven schools nationally to have a current bowl winning streak of at least four in a row.

Patterson has led the team to a 12-0 record this season, the first undefeated season since 1938. This year’s team has also won seven consecutive games by at least 27 points.

The university is ranked No. 4 in the BCS and will find out Sunday in which of the BCS bowl games it will play.

Athletic Director Chris Del Conte could not be reached for a comment. University administrators declined to comment, citing lack of knowledge on the subject.