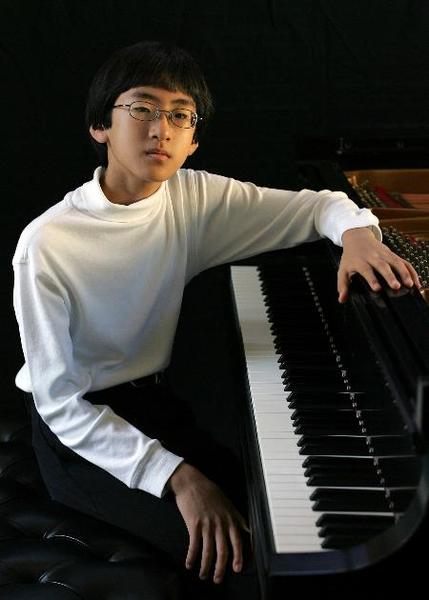 When Sahun Hong is doing what he loves, his hands are suspended between movements, awaiting their next pursuit of the black and white below them. He takes his time and makes his next approach as he plays Franz Liszt’s Hungarian Rhapsody No. 11, smoothly connecting the graceful and patient to the swift and deliberate. His face is solemn despite the dynamic sound that is emanating from the great instrument before him.

Hong, who goes by Sam, said his piano-playing all started when he began “banging around on the keys” with his aunt when he was a three-year-old in Seoul, South Korea. And while the average TCU student was 3 in the early ’90s, Hong was 3 in the mid-’90s. He’s a 15-year-old senior piano major.

“My life made me do piano at first, that’s where my life went – I played piano,” Hong said.

Even though it’s been somewhat of a long journey for him to get where he is today, piano has directed his life’s path.

“I was so impressed with Sam’s ability and that he had an exceptional love for music,” Owings said.

Hong performed as part of “Musical Awakenings,” an outreach program sponsored by the Van Cliburn Foundation that travels to 28 schools in the Fort Worth Independent School District.

Although Owings and Hong’s first encounter was exciting as Hong sparkled with potential, they would have to wait to meet again, as Hong’s father pursued a doctoral program in California.

Unfortunately, the move there was not beneficial for Hong, Owings said. His parents tried to find a teacher, but the teacher did not work out as planned. Owings said Hong’s parents would write to explain the situation.

“They said that Sam was bored and not happy with the education he was having,” he said. “They wrote that Sam was depressed, that he was being put in competitions with 20-year-old students.”

Owings said he could not stand it much longer, so he asked if Hong could come back to live with him in Fort Worth. In Thanksgiving of 2005, Hong’s parents accepted Owings’ offer, and he and his wife, Cordelia, became Hong’s legal guardians.

The Owings enrolled him in William James Middle School, which had a program for the gifted and talented.

But, again, the situation was not ideal for Hong.

“He was the star of his age group, and he was talented in school,” Owings said. “But we found out later that the best teachers in that program were not there anymore.”

For example, Owings said they were teaching Hong pre-algebra, even though he had already learned algebra while in California.

Hong’s social experience at the school was rough, too, Owings said.

“Sam was being picked on, and he wouldn’t tell us about it,” he said. “When we found out what was gong on, we decided it was unsafe for him to be there.”

Then Owings had an idea. After he withdrew Hong from middle school, Owings decided he would homeschool him and see if he could enroll him in classes at TCU.

Owings told Ray Brown, dean of admissions, about Hong, and Brown said he would like to meet him. After they met, Brown asked Owings if Sam would be ready to go to college full time.

Then, Hong met Provost Nowell Donovan, who decided Sam was mature enough – at age 11 – to attend the university.

As if that weren’t enough, Hong auditioned for the piano faculty and was unanimously accepted, Owings said.

“Everybody agreed, ‘He’s only a kid, but he’s mature enough,'” Owings said.

Hong said he knew the situation was different, but he knew how valuable an opportunity it was.

“It was a novelty at first,” he said. “Now I realize it’s a bigger picture.”

However, Hong did not pursue the opportunity because he was forced into it. It was because he wanted to do it, Owings said.

“Sam has a passion for music, a true love for music,” he said. “He’s made the decision himself.”

Owings said he remembered a time when Sam had to write a paper for a class at the university. The paper was supposed to be about where one feels at home. Hong’s decision wasn’t a difficult one.

“He said he felt at home on the stage,” Owings said. “That’s where he can be who he is more than anywhere else.”

Hong said he knew piano was for him when he was about 12 years old. Now, he said, he wants to pursue performing and teaching for his career.

“I’m a performance-oriented person,” he said. “I need performance to find my music. It’s about getting up there and sharing music with the audience.”

And the audience appreciates his sharing, Hong said. After he plays, “they’re speechless and they just clap,” he said. “I guess that’s all they can do.”

After he graduates in 2011, Sam said he wants to enter the Artist Diploma Program at TCU, which is a three-year program for musicians pursuing a career as concert artists. After that, he said, he wants to go to the Juilliard School in New York.

Juilliard is world-renowned as a performance school, and Hong has already established connections there with piano great Veda Kaplinsky, who has traveled to TCU to instruct Hong a few times.

Hong said Kaplinsky is one of his modern-day influences, along with international household name Van Cliburn and the one who gave him the opportunity to come to the university – Owings.

With quality teaching from an instructor like Kaplinsky, Hong has acquired poise in his performance that has enabled him to avoid outside emotion that would alter his play.

“I feel like you have to be mentally or emotionally stable,” he said. “I have a hard time playing when I’m mad because I feel like I’m betraying the composer.”

And with his poise has come focus, he said.

“(I’m) just listening to the sound,” he said. “I’m not thinking about screwing up. I just play the music, and that’s all there is to it.”

That’s impressive confidence for a 15-year-old, but confidence supported by years of professional performing experience. He performed with the Fort Worth Symphony Orchestra in September and won multiple awards, including a series of first place honors in Texas and New York.

But Hong said he’s just glad to be at the university, a place where he’s been the recipient of plenty of support.

“One of the things that has helped me in the past few years has been to be at TCU in the music department,” he said. “There are great professors and renowned professors.”

And Owings said it’s a pleasure to be around Hong every day.

“It’s a lot of fun,” he said with a chuckle. “It brings a lot of joy into our lives. It’s just a real blessing.”

Hong said when he first came to the university, people would ask him if he was a high school student visiting campus. Now he said he hopes he will be remembered as more than just a 15-year-old college student and instead as “someone who is passionate about what he does and puts a lot into it to achieve all his dreams.”